What creator Lin-Manuel Miranda pulled off in reimagining the Founding Fathers as men of color is a fabulous retort to the myth of a "pipeline problem."What's that like, though, for the show's White guys? I wondered this as I watched "Hamilton" on TV over the weekend. It was my second time seeing the original cast. The first was February of 2016, where I sat in the Richard Rodgers Theatre alone, spellbound and overcome. I looked back on old Facebook memories and I apparently posted this that day: "They asked Hamilton: 'Why do you write like you're running out of time?' My answer during intermission of this show of America's possibility: Because we are."That was then. Watching the musical again this past weekend, I couldn't help but wonder if the time had come. This moment in civil protest, they say, is different because White people are stepping up in solidarity and acknowledging their role in getting us here and the work they still have to do. I noticed the few White faces on stage and wondered if they might have some insight on what it was like to live the revolution that was "Hamilton," what that means now and if they might have advice on what it means to be an ally to people of color. So I turned to Thayne Jasperson, who plays Samuel Seabury — a Loyalist to the British crown and rival to Alexander Hamilton — in the film version. Jasperson holds the distinction of being the only original cast member still with the show, which like all of Broadway shuttered in mid-March due to the coronavirus. I interviewed him via email and edited the conversation for length and clarity. Let's rewind to how you ended up in the original "Hamilton" cast. Did you know this would be a hit and revolutionary for diversity in casting?I had no idea what I was in for when I auditioned and then joined "Hamilton." I remember the first day and this beautiful new take on the Founding Fathers portrayed as humans of color. During the first lab, in the ramp up to Broadway, I knew this would impact humanity. It only got better from there. How many White actors were in the original cast and in this film version? Onstage it was two women, myself and the king. Let's delve into being among the "only." Had you had that experience before "Hamilton?"I don't know that I can ever fully understand what it means to be a human of color, nor do I try to pretend that my dealings can even compare to the hardships of racism. 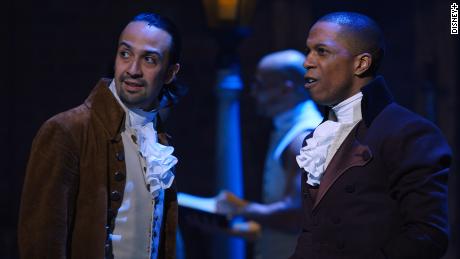 For me being the "only" in situations was growing up in Wyoming and being bullied for my interest in the arts and my softer nature. I had friends and an ex-girlfriend who called me "faggot." Whether I was or not, the emasculation took effect. I was also raised in a faith where being a bisexual man was not easily accepted. I'm learning daily to embrace who I am, in all aspects and to share my voice. How often was race openly discussed at work, backstage, during rehearsal? How did you engage and what did you learn in this process?Race was regularly discussed. I learned that I had grown up more ignorant than I'd realized. I found myself trying to relate, understand and develop an awareness as to how I could be supportive. It's still a journey. I found my foot in my mouth a number of times as I continue to learn. Early on, in 2014, we were in rehearsal. We sat outside for a lunch break and the discussion of racism in its current state ensued. I was taken aback to hear how some of my friends, who are kind and loving individuals, spoke of multiple instances where they were profiled for the color of their skin while being in predominantly white areas, streets and neighborhoods.With "Hamilton," I dove into a whole new world of education: learning what my fellow actors, as humans of color, go through. What weight does it carry to be the only original cast member still with the show? I am the last remaining original cast member in "Hamilton" on Broadway. If I am a pioneer in such an impactful show, I feel a duty to share, learn and find ways that we can bring forth light and awareness to the world, in whatever way we can. Read More – Source

Man who killed his family gets three life sentences

Revealed: How much Facebook spends to keep Zuckerberg safe

Iconic University of Tennessee rock painted with anti-Semitic message. It was...

Apple, Google, Microsoft, and Mozilla come together to end TLS 1.0

admin - May 16, 2018
0
The original concept turned Jay Asher's book into a brilliantly conceived format for a series, ..