The two were quarantining in separate rooms in their Elizabeth, New Jersey, home to avoid spreading Covid-19, which they had contracted in early April.Garcia, who is six months pregnant, gave everything she had to care for them. But it came at a cost.Like many who come in contact with the virus, she caught it too, according to Garcia's medical records, provided to CNN.Garcia and her family are among the thousands of Latinos across the US who have been disproportionately affected by the virus. Latinos make up 18% of the population but about 29% of Covid-19 deaths so far, according to the US Census Bureau and the Centers for Disease Control and Prevention.The virus left Garcia with 12 days straight of fevers and days of chest pain. To protect her baby, she turned down Hydroxychloroquine and antibiotics in favor of rest, steam baths and an asthma pump to help her breathe, she said."I stopped thinking of myself, even though I should because it's my first baby, my first child," Garcia told CNN. "The people that know me know that my parents are my world. You're stuck between the two and I chose them because I didn't want to lose them."Although she and her mother have recovered, the disease took her father from her before he got to meet her firstborn child. Carlos Arturo Garcia passed away at age 70 on April 22.

'I feel the emptiness'

As Garcia, 33, grieves the loss of her father, she is trying to keep it together for her mother. She's also continuing her day job of teaching kindergarten, now virtually due to the pandemic.Meanwhile, her husband is half a world away, awaiting his flight — if it doesn't get canceled — to the US on May 26.Garcia and Yasreynolds Rodriguez have been in a long-distance relationship for three years. He lives in the Dominican Republic and the couple was just able to get him a visa to come to the US. The family requested that the visa be expedited with "everything that I'm going through with my father, that I'm pregnant and that I had Covid," Garcia said. Luckily, it got approved.Their baby is due August 3, so the couple hopes Rodriguez is able to be in New Jersey for the birth.Garcia's friends are planning a virtual baby shower for her on June 7, so the mom-to-be is trying to look forward to that in between the waves of grief. 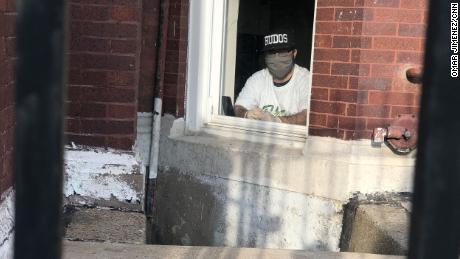 Being at home, seeing Carlos Garcia's spot at the table and knowing he isn't coming home is hard on both mother and daughter."I have to be strong for my mother because she's having a hard time," Garcia said. "Every spot, every smell, being in the bedroom, it's difficult. I try not to break down in front of her."Meanwhile her mother, Gloria Garcia, has found herself a widow at age 64. "That is the hardest thing, to be alone," Gloria Garcia said. "That is the hardest thing psychologically. I feel the emptiness."She and Carlos Garcia met in their native Colombia and were married for 38 years. Both became US citizens last year.Gloria Garcia said her daughter has been her biggest support system."She has been my support because maybe alone I would not have been able to, I would not have been able to continue," she said. 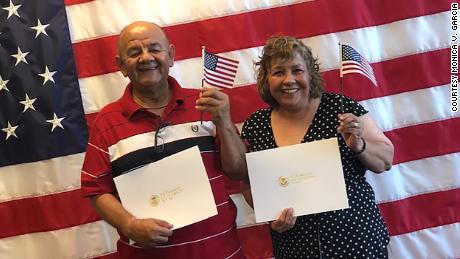 Family was everything to Carlos Garcia, and he never stopped working to support his wife and two daughters. After he had a stroke five years ago, his wife took over his job delivering medicine to nursing homes in New York and New Jersey. Carlos Garcia lost some function in the right side of his body, leaving him with a limp and a hampered arm, his daughter said."He would still get dressed in his uniform like he used to before the stroke, and he'll be the passenger, but he knew all the routes," Garcia said of her dad. "They both will go together but the actual employee was my mom."The couple were both essential workers and they kept delivering medicine even as the pandemic continued to spread across the US. On April 3, Gloria Garcia came home exhausted and the next day, she had a fever of 102 degrees Fahrenheit. That weekend, Carlos Garcia also started feeling tired and getting fevers.Garcia struggled to keep her parents comfortable with ice packs, Tylenol and lots of soup. She realized she couldn't do anything to ease their heavy breathing. She had been taking care of them around the clock for a week. 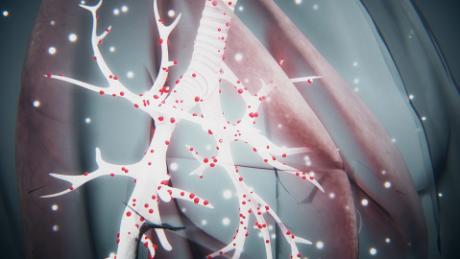 "My mom was going up the stairs and she was running out of breath," Garcia said. "My dad's not eating now, and he was hurt. I could tell he was swallowing, and it was hurting him in his chest."On Easter Sunday, she called her sister and they admitted both parents to Overlook Medical Center in Summit, New Jersey. Both tested positive for Covid-19, so they were placed in a hospital room together, at Garcia's request."I couldn't get out of the car because at that point, I already knew I had a fever," Garcia said. "I knew I had Covid even though I wasn't already tested."Garcia got tested on April 16, and she too learned she had Covid-19, according to her lab results.While in the hospital, Gloria Garcia started improving within a few days. She helped take care of her husband, even though she was sick, too."He would say to me, 'Gloria, I am thirsty. I waRead More – Source

Does housing belong in cabinet or should it be a cross-party issue?

Tropical F— Storm take tantalising steps out of their own shadow

The Bleeding Tree: can a murder ever be beautiful?

Fatally shot Marine in Washington identified amid investigation into shooting as...

admin - January 3, 2019
0
Kuznia was stationed at the barracks, where he served as a team leader for Guard Company, according ..

Westworld Is Now Getting Dragged Into The #MeToo Debate

admin - January 5, 2018
0
A state of emergency has been declared across New York, after a fierce winter storm hit the eastern ..