WATERLOO, Iowa – Ras Smith vividly remembers the mix of emotions that washed over him on the night of the 2016 election: elation at winning his first bid for elective office and becoming one of a handful of African Americans in the Iowa Legislature, followed by despair as he realized that Donald Trump had captured both his home state and the presidency.

Smith was in such a bad mood he shut down his own victory party.

“What was the point of winning this, if he won, too?” he recalls thinking. “How can people vote for me, and he still wins? How can we go from Barack Obama to this?”

As America prepares to make its choice in the 2020 elections, CNN ventured into the lives of voters around the country who are often overlooked in the traditional narratives about politics. We start this series with a look at black voters in the early caucus state of Iowa.

Today, Smith is still in politics. The 32-year-old Democrat is serving his second term in the Iowa House, representing Waterloo and a cluster of communities in the northeastern part of the state. Hes also the chairman of Iowas first Legislative Black Caucus, made up of the five African Americans who serve in the states 150-member General Assembly.

And hes spent much of the last year agonizing over his choices ahead of Iowas Democratic caucuses on February 3, which kick off the 2020 nominating season.

A dozen years after Obamas barrier-breaking win, the Democratic presidential field started out as the most diverse in history – including, at one point, two African-American senators, an African-American former governor, an Asian-American entrepreneur and a native of American Samoa.

Now, as the caucuses near, just three remain: businessman Andrew Yang, Rep. Tulsi Gabbard of Hawaii and Deval Patrick, the first African American elected Massachusetts governor. And none of them is considered a top candidate.

Smith says supporting a candidate who looks like him has never been the most important criteria in todays bitterly divided political climate.

“We need somebody who can connect with the American people on every front and really, truly represent not where we are but where we want to go,” Smith said during an interview last fall in the kitchen of his trim, three-bedroom home here. “We need … our Moses.”

Its a dilemma that has confronted many in Waterloos African American community, who take pride in what Obamas presidency represented but say they are willing to opt for hard practicality and bypass candidates of color to achieve a bigger priority: ending Trumps presidency.

That debate is playing out around the country, as the Democratic field jockeys for the support of African Americans, one of the partys most reliable voting blocs. In poll after poll this election season, black voters have eschewed candidates of color to favor Obamas vice president, Joe Biden.

A Washington Post-Ipsos poll released in January showed 48% of registered black voters supporting Biden – more than twice the number backing any of his rivals. And nearly 6 in 10 moderate or conservative black voters favored Biden.

“Electability is overriding the whole thing,” said Felicia Smith-Nalls, who joined Smith and a group of other African American professionals at a Waterloo cocktail lounge one evening last fall to watch Monday Night Football and talk politics.

“This year, it feels like we are all playing chess,” said Smith-Nalls, who works as the citys neighborhood services coordinator and is considering backing Biden. “Its not who I want, its who will Trump voters support?” In January, she was still weighing her choices.

Snapshot of our country

African Americans make up just 4% of Iowas nearly 3.2 million residents, US census figures show. But they constitute roughly 16% of Waterloos 68,000 residents, making this longtime manufacturing town bisected by the Cedar River one of the most diverse communities in the state.

The citys mayor, Quentin Hart, is African American, as is the chairwoman of the countys Democratic Party, Vikki Brown.

Smith grew up on the citys heavily African American Eastside and still lives there today. The first sizable numbers of black people to move to Waterloo came to work on the railroads before World War I. Later, jobs in manufacturing and meatpacking drew more black residents making the migration from Southern states. 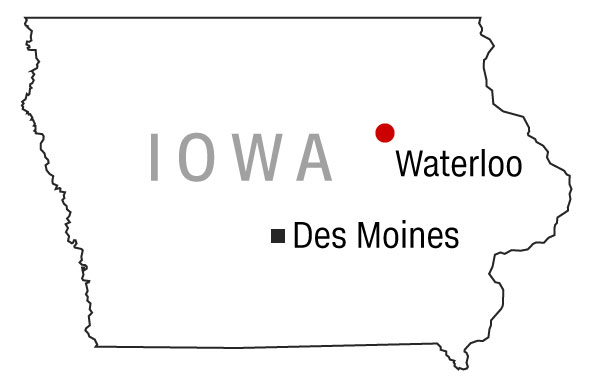 Both of Smiths parents grew up in the city. His father worked for more than four decades on the assembly line at John Deere, which began making tractors in Waterloo more than a century ago. His mother serves as pastor of Waterloos Faith Temple Baptist Church and lectures in the social work department at the University of Northern Iowa.

To Smith, Waterloo and Iowa are a microcosm of America: a mix of urban and rural, conservative in many ways but progressive in others. In 2009, Iowa became the third state in the country — and the first in the heartland — to legalize same-sex marriage.

“If you were to shine a microscope from outer space … I think if you were to hit Waterloo, I think thats the best snapshot of where our country is,” Smith says.

The city has wide racial gaps. The black unemployment rate, for instance, is nearly four times that of white Waterloo residents, according to Census Bureau estimates. Almost two years ago, a financial website, 24/7 Wall Street, cited large black-white gaps in income, unemployment and homeownership to declare the larger Waterloo-Cedar Falls community the worst metro area in the country for African Americans – an unwelcome distinction that comes up repeatedly in conversations with the Smith and other black residents.

Although he grew up in a black Waterloo neighborhood, he graduated from a predominantly white high school in neighboring Cedar Falls before heading to college. His educator wife, Amelia, is white, and together they are raising four biracial girls, their two daughters and Amelias two nieces, who are all under the age of 8.

He knows intimately the pain of gun violence. A little more than six years ago, his older brother Myron shot his own wife, wounding her — before fatally turning the gun on himself. Smith marked the tragedy with a tattoo on his left bicep that says “Big Mo,” his brothers nickname, and includes the logo of a Cadillac, the car his brother drove.

But Smith also is a gun owner and loves to hunt pheasant.

“I can drive 20 minutes in that direction and find a place to hunt,” he says, gesturing toward the east. “I can drive downtown and get a beer. I can be in an all-black community or an all-white community within steps. But at the end of the day, we all have someplace common to go.”

Waterloo was Obamas first stop in the state as a presidential candidate in 2007, just hours after he kicked off his campaign on a frigid February day in neighboring Illinois.

And his victory in the Iowa caucuses the following year cemented Obamas status as a top-tier contender for the Democratic nomination, offering a rebuke to those who questioned whether a black candidate could win an overwhelmingly white state. Obama went on to twice win Iowa in the general elections.

Smith says he wasnt very interested in politics until he met Obama at a campaign rally at his old Cedar Falls school. He was 19 at the time.

Obama “came to the line and shook my hand and said, Whats up, man? How you doing? ” Smith recalls. “Im thinking, like, Whoa. This guys running for president, and hes super cool. ”

Smiths vote for Obama was his first for a presidential candidate.

But Iowas politics have seesawed dramatically since Obamas two victories here. Nearly a third of Iowas 99 counties flipped from voting twice for Obama to supporting Trump in 2016, handing him the state.

Smith says Obamas presidency may have been too much, too soon, for the nation.

“Honestly to me, Donald Trump represents what America is, who weve been. Not our greatest moments,” he says. “Theres this myth that we made this huge regression when we went to Donald Trump.”

“No, I think we overachieved when we elected Barack Obama,” Smith continues. “I think Barack Obama served as this idea of where America wants to get to, and sometimes leadership doesnt match where our country is.”

Trump won just 8% of the African-American vote in 2016, exit polls show. But the President and his reelection team have sought to court black voters, running ads in black newspapers and touting African-American unemployment rates, which have fallen to record lows during his tenure in office.

At a recent launch event for the “Black Voices for Trump” coalition, Trump argued that Democrats were too focused on issues like impeaching him to help African Americans.

“Were going to make 2020 a year of change in black communities all across the country," Trump declared.

But Smith says Trumps inflammatory rhetoric about immigrants, Muslims and African countries and verbal attacks on lawmakers of color is penetrating all parts of American life.

Smith steers clear of political talk at home. But his daughter, Maria, who will turn 7 in April, knows who Trump is. “She thinks hes scary. She thinks hes mean, and she doesnt think that he likes her.”

“How did my daughter, whos never met Donald Trump, get that from TV? I mean, the president is supposed to be the most unifying part of our country.”

His mother, Belinda Creighton-Smith, was determined to develop a proud black identity among her Iowa-raised children. Smiths full name is RasTafari, taken from the royal title (Ras) and first name (Tafari) of the late Ethiopian Emperor Haile Selassie, revered by followers of the Rastafarian movement. Another brother is Rameses, for the Egyptian pharaoh.

But, throughout his life, Smith has felt the sting of racism in his home state.

In high school, he says, players on opposing football teams shouted racial slurs at him. One spat on him. As recently as 2016, crosses were burned in Dubuque, about 90 miles away from Waterloo. That year, he had an encounter with police that he still cant shake. Smith says he was leaving a campaign function at a local church — carrying a batch of rice pilaf to his car — when police bore down on him.

“The second I unlocked the car, maybe six or seven police cars surrounded me”; because, officers said, he matched the description of a crime suspect. Despite wearing a campaign shirt that bore his name and providing his identification, Smith says, the officers insisted on running a background check before letting him go.

“Im thinking, OK, but youve allocated six officers, so whoever committed this crime is long gone, and Im here and youre checking to see if thats really rice pilaf in my container. ”

Smith left the encounter unscathed but angry, an emotion he says he swallowed to avoid a confrontation.

Where is Xur Today? Destiny 2 Xur Location, What Exotics is...

NASA tests a booster that produces 3 million pounds of thrust

Are reduced-calorie wines worth it?

admin - February 8, 2018
0
Reduced-calorie wines can save you even more calories, perhaps enough to earn a few bites of cheese ..