In the eyes of Ursula von der Leyen, the next European Commission will be gender-balanced, geopolitical and a “guardian of multilateralism.”

Perhaps fittingly for a Commission led by a former German defense minister, it will also be an EU executive firmly on the defensive — with one top vice president fighting climate change, another fighting the corporate hegemony of U.S. digital behemoths, and others devoted to “protecting our European way of life” and “a stronger Europe in the world.”

Von der Leyen, the first woman ever to lead the institution, put forward her slate of nominees Tuesday. The team has historic, near-perfect gender balance, with women holding 13 of 27 positions. And it has portfolio assignments designed to tackle urgent policy challenges, though some with absurdly aspirational, even pompous names that will do little to counter the EUs reputation for haughtiness.

Timmermans will be in charge of a “European Green Deal” aimed at ramping up EU policy to fight climate change and push sustainability.

Lofty ambitions notwithstanding, von der Leyens nominees must be confirmed by the European Parliament — and some of them will face tough scrutiny over allegations of misconduct. That includes Sylvie Goulard of France, who was interviewed by French police on Tuesday in a case involving misuse of EU funds; Rovana Plumb of Romania, who was implicated in a corruption case in 2017; and Polands Janusz Wojciechowski, who is under investigation by the EUs anti-fraud office.

In all there will be eight Commission vice presidents — three executive VPs, with one, Frans Timmermans of the Netherlands, designated as “first vice president” to serve in von der Leyens absence, and five more vice presidents, meaning roughly two commissioners per VP.

Announcing the team, von der Leyen insisted that rank and seniority were not her priorities.

“We have a structure that focuses on tasks, not hierarchies,” von der Leyen told reporters at the Commission headquarters. “We need to be able to deliver on the issues that matter the most, rapidly and with determination.”

“I want this European Commission to be a flexible, modern, agile Commission,” she said, at another point calling it a “geopolitical Commission” and a “guardian of multilateralism.” 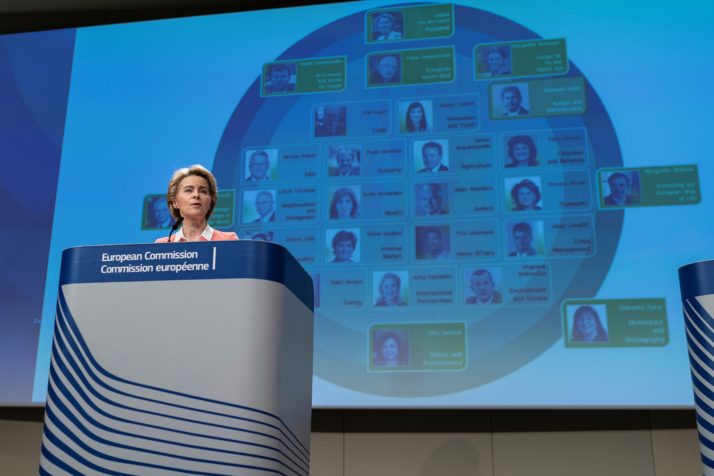 “As a president, Im free to decide,” von der Leyen said. “Thats what I did”| Kenzo Tribouillard/AFP via Getty Images

Von der Leyens nominees include a dozen women — a leap forward from the current Commission, which has eight women, and a seismic shift for the EUs executive body, which from 1985 to 1988 had no women at all.

Such grand responsibilities as serving the European way of life also come with more mundane rewards: if confirmed, the commissioners stand to earn a base salary of at least €270,000 per year, plus allowances, with officials in senior roles earning more.

And despite the obvious risk of appearing to have more leaders than followers — hardly a new challenge for the EU and its five cross-institutional presidents — the assignments proposed by von der Leyen also reflected some breathtakingly ambitious policy goals.

Timmermans will be in charge of a “European Green Deal” aimed at ramping up EU policy to fight climate change and push sustainability.

Vestager, in turn, will not only become the blocs digital czar but will retain her current position as competition commissioner, continuing a role overseeing the EUs anti-trust regulations that brought her to global prominence and even drew criticism from U.S. President Donald Trump, who derisively referred to her as the “tax lady.”

In stark contrast with the Juncker Commission, women hold many of the most powerful posts and prominent portfolios.

These include Věra Jourová of the Czech Republic, who will be vice president for values and transparency; Goulard, who as a former French defense minister will take a broad internal market portfolio and oversee a new directorate general covering defense, industry and space; Croatias Dubravka Šuica, a former mayor of Dubrovnik, as vice president for democracy and demography; and Kadri Simson, of Estonia, as energy commissioner.

The selection of Jourová, representing one of the Visegrad Four nations of Central and Eastern Europe, carries special significance given still-simmering tensions between Brussels and two of the V4 grouping, Poland and Hungary, over protections for rule of law and democracy.

In a statement, Jourová, who is currently the EU justice commissioner, said she relished the new role. “My memories of communism are too vivid to be complacent about challenges to fundamental freedoms, plurality of media or the rule of law,” she said, adding that threats to democracy could be found in many forms.

“Through my experience from the last five years I am very alarmed about new threats for democracy stemming from lack of transparency in the digital age or from foreign election manipulation, including through disinformation campaigns and misuse of personal data,” she said, adding: “This is a great opportunity to unite Europe and build bridges between East and West, North and South.”

Von der Leyen also seemed to send a pointed message to the U.K. by nominating Phil Hogan, of Ireland, to be trade commissioner. Hogan, who is highly regarded for his work as the EUs current agriculture commissioner, is likely to sail through the confirmation process, making him the face across the negotiating table if and when the U.K. is able to accomplish Brexit and begin talks over a new EU trade agreement. 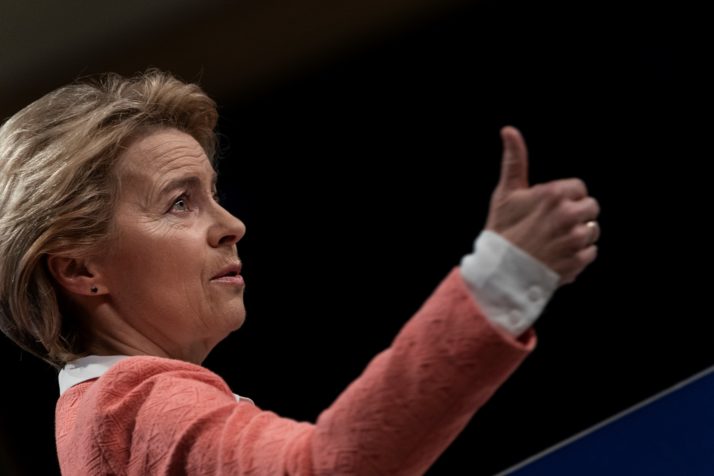 Among the other men on von der Leyens team, Josep Borrell, currently the Spanish foreign minister, will be high representative for foreign affairs — a decision that was made by the European Council at the same time leaders chose von der Leyen for the presidency.

By proposing eight vice presidents, including three executive VPs, von der Leyen will undoubtedly face questions about whether she has created a College with too many bosses — particularly after her decision to create a third executive vice presidency for Dombrovskis, something that was not envisioned by EU leaders when they named von der Leyen president in July.

Leaders specified executive slots for Timmermans, a social democrat, and the liberal Vestager as part of a carefully calibrated leadership package intended to balance out the conservative European Peoples Partys hold on the Commission presidency.

But in response to a question from POLITICO, von der Leyen noted that the Council had not appointed any official from Central or Eastern Europe to the EUs senior leadership — and she had acted to address this by elevating Dombrovskis.

She took personal credit for having achieved “absolutely the right balance” between political affiliation and geography.

Noting the Councils nominations of herself for the Commission, Belgian Prime Minister Charles Michel as Council President, Borrell for high representative of foreign affairs, and Timmermans and Vestager, she said, “I am talking about five decisions that have been taken without any representation of Central and Eastern European countries … It was very important for me to find a balance as I showed on the map.”

She went on to note that the presidents of the Commission, Council and Parliament each represented one of the main, pro-EU political groups, the center-right EPP, the center-left Socialists and Democrats, and the liberal Renew Europe group, and that each party had one executive vice president in the Commission.

“As a president, Im free to decide,” von der Leyen said. “Thats what I did.”

Chris Hemsworth picks up hitchhiker – in his helicopter

admin - February 22, 2018
0
Oracle and Naspers, two of the world’s largest tech companies, control a nonprofit group that is the..