The men, who as boys were known as the Central Park Five, took the stage to introduce Grammy Award-winning singer H.E.R.Kevin Richardson, Antron McCray, Raymond Santana, Korey Wise and Yusef Salaam are now known as the Exonerated Five, and they received a standing ovation.Their story was the basis of the Netflix limited series "When They See Us," which dramatized their experiences of being wrongly convicted in a 1989 rape case in New York. The show has stoked strong feelings about how they were mistreated, subsequent struggles and eventual exoneration.The 19th annual event celebrates the best in African-American culture. The show kicked off with a performance by the most-nominated artist of the night, Cardi B.2019 BET Awards winners: The complete listThe rapper kept it hot with a lap dance for her husband, fellow artist and Migos member, Offset, as she and a host of dancers turned it out. 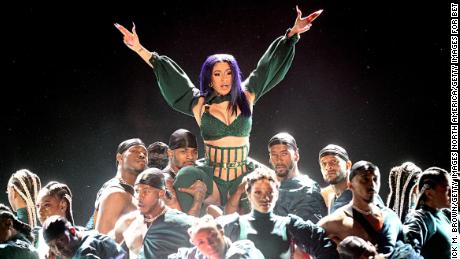 There were several a few buzz-worthy moments during the show.Rapper Snoop Dogg had Twitter scratching its head with his win for the Dr. Bobby Jones gospel award.Yes, Snoop won the gospel category at the BET AwardsBilly Ray Cyrus sealed his invitation to the family cookout with his performance with Lil Nas X, who is now the reigning rapper of country music with his viral hit, "Old Town Road."The audience was on their feet singing along to the song, which has stoked debate about whether it's country or hip hop. Lil Nas X's 'Old Town Road' hits No. 1Tyler Perry turned the stage into a pulpit while receiving the Ultimate Icon Award.Perry, who went from writing and starring in plays to owning his own studio, spoke about learning to turn pain into powerful stories."When I built my studio, I built it in a neighborhood that is one of the poorest black neighborhoods in Atlanta, so that young kids could see that a black man did that and they can do it, too," Perry said. "The studio was once a Confederate army base, which meant that there were Confederate soldiers on that base plotting and planning on how to keep 3.9 million Negroes enslaved. Now that land is owned by one Negro."Mary J. Blige was presented a lifetime achievement award from Rihanna and performed a medley of her hits.Read More – Source

When an 8-year-old boy lost all his toys in a house fire, his classmates...

The General Data Protection Regulation: What it says, what it means

Bloodlines review: It’s something in the genes, and it only improves...

Family of Avicii grateful for ‘loving words’ about late musician