He had little hope that 2019 would be any different in the Republican-controlled legislature. But with more headlines drawing attention to violence against transgender people, it felt as urgent as ever to try, he said. "If something's right, you have to keep trying to do it until it gets done," he said. "By filing these bills over the years, it gives people who are pro-LGBTQ rights something to organize around."One week before the bill's supporters made their case to the House Criminal Jurisprudence Committee on April 29, a mob yelling hateful slurs assaulted Muhlaysia Booker, a transgender African American woman in Dallas. Nearly three weeks later, Booker was dead and Coleman's bill had failed to make it out of committee.Now that another transgender woman has been found dead in Dallas — the latest in a string of unsolved cases involving transgender victims — advocates say they see a cause-and-effect relationship between the violence and inertia from elected officials and law enforcement.But action — or inaction — prompts reactions, Coleman said. And that's what LGBTQ advocates say they are seeing now in Dallas. Members of the committee did not respond to CNN's request for comment.

Two community meetings in one night

Community members had two meetings to choose from on Thursday night: one hosted by Dallas Police and another convened by members of Dallas' black transgender community.The second one was convened at the last minute after the discovery of Chynal Linsdey's body in a lake on June 1, just two weeks after Booker's death, said Carter Brown, founder of Black Transmen and a member of the Black Trans Advocacy Coalition.Her death was the latest sign that transgender people can't rely solely on authorities for safety or protection, he said. 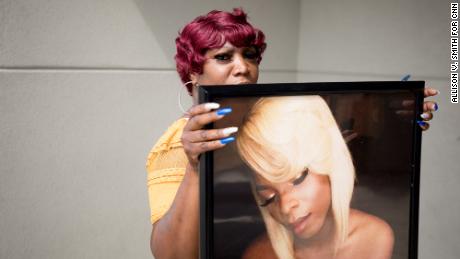 "We're spending our time and energy building the LGBTQ community at large in order to support transgender lives because the legal system and the criminal justice system are failing us."On Wednesday, the black transgender community gathered in a closed-door session to discuss their needs, Carter said. On Thursday, representatives from a broader coalition of LGBTQ groups from across Dallas crammed into donated office space to listen and share ideas. "After we buried Muhlaysia, I looked into the casket and that was the first time that I imagined and thought that could be me," co-organizer Camarion Anderson of BTAC told the crowd."I believe we are in a position to come together as a community to combat some things that are overlooked. We need to find ways to unite."

What the black transgender community needs to feel safe

Notes scribbled on a whiteboard under the heading "Black Trans Emergency Community Meeting" guided the conversation.Transgender-friendly housing and medical resources, including counseling, emerged as top short-term needs, along with jobs and help changing gender markers on identity documents.One after another, volunteers offered help.Reverend Dr. Neil G Cazares-Thomas, senior pastor of Cathedral of Hope, where Booker's funeral was held, offered housing for transgender youth.Another person pledged to create a private Facebook group offering self-defense and shooting classes in response to comments that more transgender people were arming themselves to stay safe.Mark Newman from Equality Texas offered Lyft codes of up to $10 dollars, although an audience member said drivers could pose be threat.The meeting ran nearly two hours, but it's just the start, said co-organizer Niecee X of Black Women's Defense League."I feel empowered as a community to start to deal with our issues as a collective."

The 'protocol' of public mourning

Booker's assault followed by her slaying prompted a cycle of rallies, vigils and forceful condemnations of the violence that befell her. Brown said such gestures fall short of providing transgender people with tangible measures that will protect them, such as updating the state's hate crime law to include gender identity in the list of protected classes."It's starting to feel like protocol to pacify community with a town hall, a few meetings, a few rallies," he said. "But then at the end of the day, we are back where we started."In a Monday press conference announcing Lindsey's death, Dallas Police Chief U. Reneé Hall emphasized the department's commitment to solving the cases in spite of limited resources. She asked the public for tips and said she has reached out to the FBI to see if federal hate crime charges are warranted."We are actively and aggressively investigating this case, and we have reached out to our federal partners to assist in these efforts."

What changing the hate crime law would do

Texas is one of 13 states with hate crime laws that cover sexual orientation but not gender identity, according to the nonprofit think tank Movement Advancement Project. The laws take different forms, but often, the laws bring enhanced penalties for bias-motivated crimes.A change to the state hate crime law would send the message that Texas lawmakers value transgender lives, said Leslie McMurray, transgender education and advocacy coordinator for the LGBTQ-focused Resource Center in Dallas. She was among those who testified in favor of Coleman's bill. And she attended Booker's funeral, where she was horrified to hear one proclamation after another from elected officials condemning Booker's Read More – Source

GTA 6 Release Date News: Next Grand Theft Auto to launch with a game...

Revealed: The outer London borough that locals say has the best...

admin - March 7, 2018
0
Behind the scenes at Wikipedia, an edit war is being waged on gun control as special interest groups..