In its complaint, the government demanded a jury trial that would put front and center the actions of the company at the heart of a 97,000% drug price hike. The price of Mallinckrodt's anti-inflammatory drug Acthar — best known for treating babies with a debilitating seizure disorder — has gone from $40 a vial in 2000 to nearly $39,000 today.The complaint was filed in the US District Court for the Eastern District of Pennsylvania by US Attorney William McSwain. Mallinckrodt could face fines of nearly $240 million if found liable.The government alleged Mallinckrodt used a foundation, called the Chronic Disease Fund, as a conduit to pay kickbacks as part of the scheme to maintain the high price of Acthar. "The scheme allowed the Company to continually raise Acthar's price yet market it as 'free' to patients and doctors, shifting the drug's ever-increasing cost to Medicare," the government said in its complaint. "As a result of its conduct, Mallinckrodt caused the submission of millions of dollars in false Medicare claims for Acthar."McSwain said Mallinckrodt's actions undermined the "viability of Medicare Part D, which our nation instituted to help seniors cover prescription drug costs." Medicare spent about $2.7 billion on Acthar from 2011 to 2017, according to publicly available data."Drug companies are not allowed to pay patients' co-pays. That rule is designed to prevent the very thing Mallinckrodt allegedly did here — outrageously jack up Acthar's price and leave the government with the entire bill," McSwain said in a statement.Assistant Attorney General Jody Hunt, with the Department of Justice's Civil Division, said in a statement the message is now clear that the government "will hold accountable drug companies that pay illegal kickbacks to facilitate increased drug prices."The government declined to say whether it will pursue criminal charges against Mallinckrodt. Mallinckrodt said it intends to "vigorously defend" itself against the allegations and referred to the issue as a "legacy matter" relating to a foundation with Questcor, the company it acquired in a $5.6 billion deal in 2014. 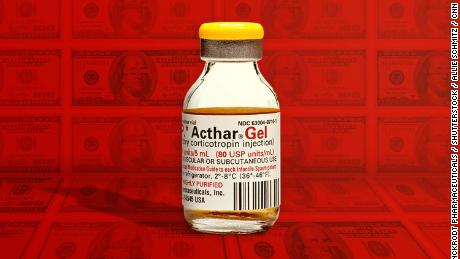 Mark Casey, Mallinckrodt general counsel, said the company tries to resolve "legacy matters in a reasonable and manageable way.""Unfortunately, that has not been possible to date regarding the allegations relating to Questcor's charitable foundation activities, despite what we believe was lawful and appropriate activity," Casey said in a written statement.Also on Wednesday, Mallinckrodt announced a separate potential settlement of $15.4 million with the US Department of Justice. It related to Questcor's "sales and marketing activities," Mallinckrodt said. The government said that matter was unrelated to its lawsuit."The allegations made by the government in the complaint filed today do not relate to any other settlement," said Jennifer Crandall, spokeswoman for the US Attorney's Office of the Eastern District of Pennsylvania.

Charms of the Orient

‘You betrayed me’: Nassar abuse victims speak out