Tristan Beaudette was shot once in the head on June 22 as he slept in a tent with his 2- and 4-year-old daughters at the Malibu Creek State Park in California. Investigators looking into the case then connected the homicide with a series of shootings in the park dating to November 2016.On Monday, prosecutors charged a suspect of carrying out those shootings. Anthony Rauda, 42, was charged Monday with one count of murder, 10 counts of attempted murder and five counts of second-degree burglary, the LA County District Attorney's Office said. Rauda is accused of opening fire on unsuspecting campers or motorists beginning in November 2016 when he allegedly wounded a man who was sleeping in a hammock in the Malibu State Park area, authorities said. Less than a week later, he allegedly fired into the sleeping area of a vehicle, prosecutors said.Rauda also is accused of shooting into vehicles on three different occasions in 2017, but no one was injured. On June 18, 2018 — just days before the fatal shooting of Beaudette — Rauda allegedly shot at a Tesla on Las Virgenes Road. The suspect, who the LA County Sheriff's Department said has no known residency,has also been charged with several burglaries that happened last year in the Calabasas area. He was arrested in October and is scheduled to be arraigned Monday in Los Angeles County Superior Court, Van Nuys Branch.The Malibu Creek State Park is a scenic recreation area 25 miles from downtown Los Angeles that's been used as a backdrop for movies and television shows. The rugged terrain crisscrossed with streams was used in the original "Planet of the Apes," "M*A*S*H," "Butch Cassidy and the Sundance Kid," "How Green Was My Valley" and "Pleasantville."

Father had taken his daughters camping 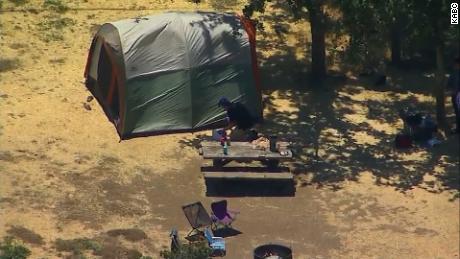 Beaudette took his daughters camping while his wife was studying for an exam, Rabbi Arnie Rachlis of the University Synagogue in Irvine told CNN in June. Beaudette was "so comfortable in nature and as a parent … it was natural that he would take them on the trip," he said.Beaudette was an associate director at the pharmaceutical company Allergan, according to his LinkedIn page. The online bio also says Beaudette had seven years experience in late-stage pharmaceutical drug-product development."Tristan will be remembered as a talented scientist who was admired by all who knew him and a meaningful contributor to our company's research and development efforts," Allergan said in a statement.Beaudette's wife, Erica Wu, issued this statement in June: "Words cannot express the absolute devastation and sorrow we feel from the loss of someone so dear to our family. You were admired by so many for your devotion to your wife and two daughters. We are all so fortunate to have known you for your short time on Earth. You were taken from us far too early, doing something you loved with the girls you adored."Rabbi Rachlis said that Beaudette adored his daughters and was a warm human being."We would see the family at many of the University Synagogue events," Rachlis said. "Tristan was such a warm human being with this tremendous smile. You would see his little girls on stage, performing or singing. And he was riveted to them, adored them, looking at them with a big smile."

CNN's Nicole Chavez and Deanna Hackney contributed to this report.

I survived the shooting. Arming teachers is wrong

Where is Xur today? Destiny 2 Location, time he arrives for 17 August and...

US officials in China talks amid trade war fears

admin - July 21, 2018
0
The father of two survivors of a high school massacre in Florida has died after being shot at his co..