In 1976, I was a 6-foot-tall, 13-year-old girl growing up in suburban New Jersey. I was addicted to sitcoms. It was my escape from the realities of not fitting in (in more ways than one), and I had spent much of my single digit years dreaming of running away to "The Brady Bunch" house, riding in "The Partridge Family" bus and hanging out with Mary and Rhoda on "The Mary Tyler Moore Show." At the start of my freshman year of high school, a new show came on the air. It was about Laverne DeFazio, played by the inimitable Penny Marshall, and Shirley Feeney, portrayed by Cindy Williams — two single women living together, working at Shotz Brewery in Milwaukee and doin' it their way. And the show's ubiquitous theme song had people all over America speaking Yiddish! Give us any chance — we'll take it. Read us any rule, we'll break it went the lyrics of the show's theme song. These women, Laverne and Shirley, were fearless. Finally, here on television were people I could relate to. 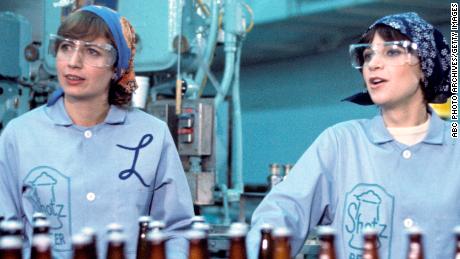 Laverne had a thick Bronx accent and wore sweaters with the letter L monogrammed prominently in script on the front. She was bossy, brash and funny, and best of all, she did things her way. We had so much in common. One can never underestimate the power of feeling represented on television.Nothin's gonna turn us back now, straight ahead and on the track now. …There is nothing we won't try. Never heard the word impossible. This time there's no stopping us. We're gonna do it.Not to mention how special the main characters' relationship on "Laverne & Shirley" was. Best friends forever. I could see myself living in an apartment with my best friend, too! In season six, Laverne and Shirley moved to California to fulfill their dreams of being in the movie business. I was in college and had done my first stand-up gig on a dare. I knew by then that my dream too was to be in show business. All of their friends follow suit, and the show lasted three more seasons after that. Was this a harbinger of what was to become of Marshall?She went on to become one of the most relevant directors in Hollywood. With the 1988 movie "Big," starring Tom Hanks, she became the first woman to direct a film that grossed more than $100 million. She went on to direct perhaps the best "chick flick" of all time, "A League of Their Own" — and so many more. She became an icon and gave so many female directors hope and an example to follow. Even when she became a household name, she never changed the way she talked or the way she looked. She was the embodiment of being true to oneself. There is no comedy without truth. And she had impeccable timing.On your mark, get set and go now, Got a dream and we just know now, We're gonna make our dream come true. But the best part was that we got to know the real woman in that monogrammed sweater, and what a mark she left. The same woman whose stand-in for a shampoo commercial she was shooting with Farrah Fawcett wore a placard that read "Homely Girl." Penny Marshall was beautiful. She was an unapologetic tomboy. She was in a league of her own. She gave girls like me permission to dream. I hope she knew how many people she made happy — doin' it her way. May she rest in peace.

Lily Allen hasnt spoken to her father since she claimed he had cocaine-induced heart...

admin - October 20, 2020
0
Hundreds took to the streets in cities across Bulgaria on Friday, marking the 100th consecutive day ..

Artisanal doughnuts on the rise: Like coveted concert tickets, they can...

China has been secretly installing spyware on some tourists Android phones