CHICAGO — From the street, the GEO Care re-entry center on Chicagos south side doesnt feel like a welcoming place.

A two-story brick box painted off-white and green, it exudes the austerity of the criminal justice system — perhaps owing to the fact that its attached to a state parole office.

But the buildings drab exterior hides what might better be described as an oasis, at least for ex-inmates coming out if the Illinois prison system. The Illinois Department of Corrections sends parolees here to get help in acquiring the things theyll need to restart their lives and, hopefully, make their most recent stay in prison their last.

These can range from basic items like getting a drivers license to locking down a steady job, which is almost always the key to post-prison rehabilitation, says Janet Szydelko, who has been the head program manager at the center since it opened in the Chatham neighborhood in 2015.

“Usually any need they have does not go unmet,” Szydelko told The Daily Caller News Foundation.

At any given time, GEOs Chicago Chatham re-entry center manages a case load of about 85 ex-offenders, who typically stay in the program for three to six months, according to Szydelko. It is one of six facilities in GEO Cares network in Illinois, which oversees about 1,500 parolees across the state.

If GEO Care sounds familiar, thats because its a division of GEO Group, one of the largest operators of privately-run prisons and adult detention centers in the country. The Florida-based company has long been a favorite target of criminal justice reformers, particularly those on the political left, who see it as profiting from high incarceration rates in the U.S.

More recently, GEO Group has gained notoriety for running immigration detention centers for the federal government, a service under heightened media security amid the Trump administrations crackdown on illegal immigration. The company found itself at the center of controversy in October, when a government watchdog said one of its immigration detention facilities failed to meet federal medical and safety standards. (RELATED: Private Immigration Detention Center Says It Has Already Fixed Problems In Watchdog Report)

GEO Group does not operate any immigration detention centers in Illinois, but some Democratic officials and government unions want the state to cut ties with the company because of its association with the administrations immigration policies

In April, state Rep. Kelly Cassidy, who represents a district on Chicagos far north side, introduced a bill that would bar the state from contracting with any for-profit company to provide rehabilitative re-entry services. Then, in August, the Chicago Teachers Pension Fund voted unanimously to unwind its positions in companies that operate immigration detention centers.

The divestiture was largely symbolic — the funds holdings in GEO Group and Tennessee-based CoreCivic represented a tiny fraction of one percent of its $10.8 billion value. Still, the move reflected the political environment in Illinois, where private prisons operators “are now officially on notice,” as American Federation of Teachers chief Randi Weingarten put it at the time.

GEO Group rejects the perception that it backs the Trump administrations approach to immigration enforcement, arguing that it does not advocate for or against any immigration detention policy. Company officials also contend that elected officials unfairly focus on GEO Groups immigration-related business and ignore its re-entry centers, which serve a marginalized population of ex-offenders.

Barr argues that, far from encouraging more incarceration, GEO Group is keeping people out of prison through its contracted rehabilitation services. He pointed to an internal study showing that graduates of GEOs re-entry programs in Illinois had a 23 percent recidivism rate over three years, compared to 46 percent of parolees who did not participate. 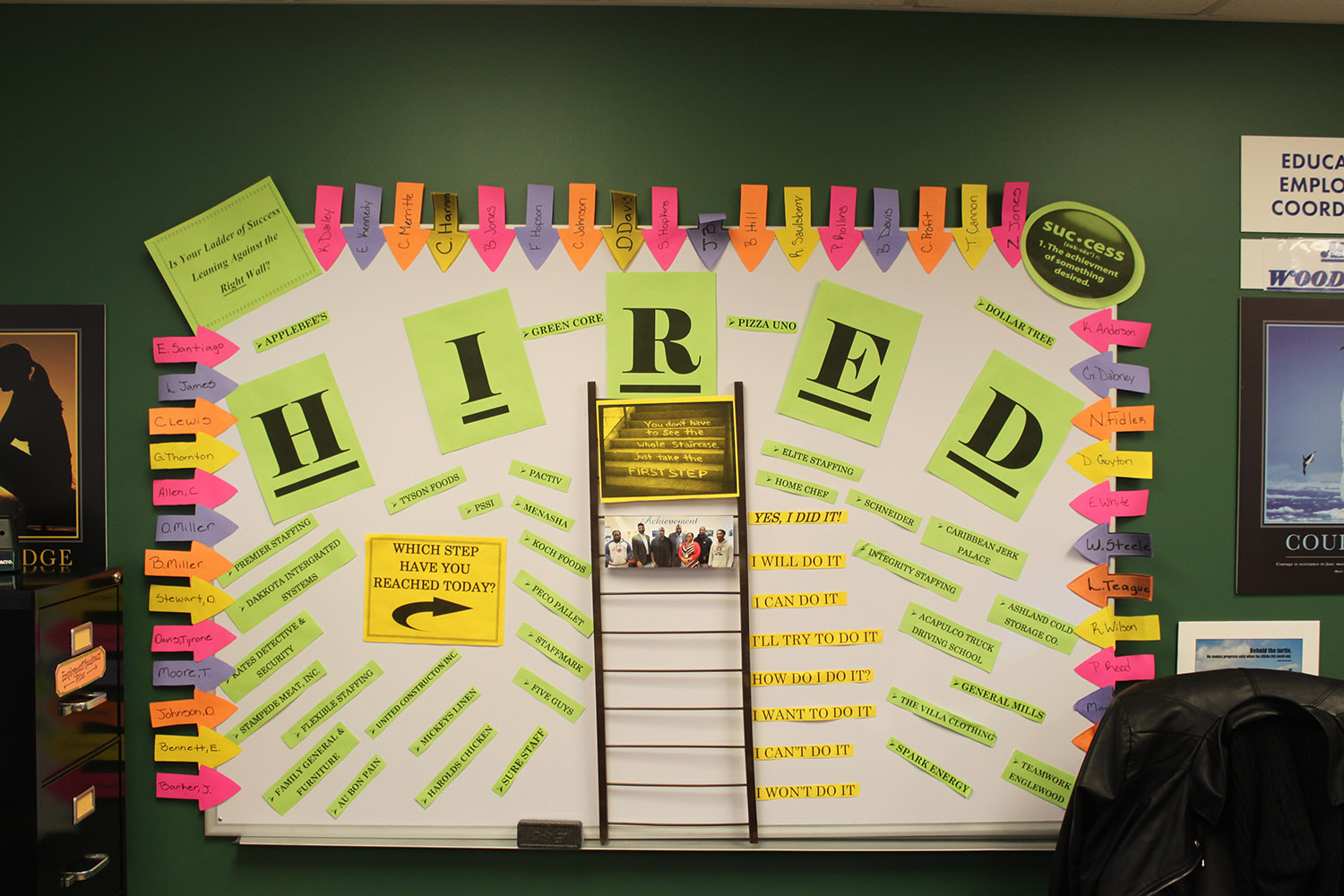 A job board tracks the employment progress of parolees at the GEO Care re-entry center in Chicagos Chatham neighborhood. (Will Racke/TheDCNF)

At the Chatham center, Kayla Woodland doesnt have time to worry about political disputes over GEO Groups corrections division. As the centers employment coordinator, she spends most of her time trying to place participants in a steady job, which is second only to substance abuse in predicting if a parolee will end up behind bars again.

A big part of Woodlands job is making contacts with local businesses that are willing to hire convicted felons, then inviting them to recruit at the Chatham center. In a tight labor market, many companies are happy to do so, something that comes as a welcome surprise for newly paroled offenders.

The job sessions “open them up to seeing what they can do, as opposed to what they are restricted from doing,” Woodland said.

Woodland and other case managers at the Chatham center believe there is no ex-offender for whom they cant find a job. That includes people whove gone to prison for even the most serious crimes, who would otherwise write themselves off as permanently unemployable.

One such parolee is Theodore Nurse, a 38-year-old native of Chicagos far-south side Roseland neighborhood. He came to the GEO re-entry center in September, after serving 20 years in state prison for murder.

“Not in a million years” did Nurse think he would be be able to find a job with a murder conviction and two decades of institutionalization in his background, he told TheDCNF. As it turns out, Woodland found him a job with a distribution center in the southwest suburbs “quite easily.”

Nurse now works as many as 48 hours per week, giving him a steady income that was beyond imagining just months ago. He credits the services he receives at the Chatham center, which include job placement and anger management, with helping him adjust to life outside prison.

“[The program] teaches you how to cope with people who look down on you or dismiss you because of your past,” he said. “It turned out to be a life-saving opportunity. It taught me that not everyone turns their back on you because of your background.”

admin - April 26, 2018
0
Charlie Rose just cant seem to get the hint. Even though the disgraced former CBS TV host has been ..

Cardi B and Offset get up close and personal in Jingle...