The first winter storm of the season is fading but a warning remains in effect for Virginia, where 11 inches of snow has so far fallen in Roanoke — the city's fourth highest December total on record.Hundreds of flights out of Richmond, Virginia, as well as Charlotte and Raleigh-Durham, North Carolina, were canceled Sunday. Airlines at each airport hope to resume normal operations late Monday. Richmond International Airport said on Twitter it had 111 canceled flights Sunday night and 36 Monday. Raleigh-Durham International Airport had 245 flights canceled Sunday evening, according to the airport's website. Charlotte Douglas International Airport had more than 1,000 flights canceled Sunday, according to flight tracking website FlightAware.Thousands of customers in the Appalachian region were still without power Sunday night, including 146,000 in North Carolina. Power outages also are affecting 81,000 in Virginia, 58,000 in South Carolina and about 10,000 in Tennessee. CNN meteorologist Pedram Javaheri said the storm is pulling away from the East Coast, but snow showers could remain until mid-afternoon Monday. After that, it'll be dry and cold through Tuesday, he said. 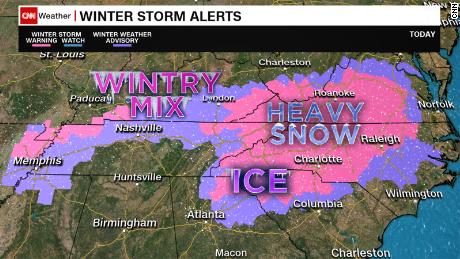 The Appalachian region of the country received up to 24 inches of snow over the weekend, Javaheri said. "They kind of got the bull's eye of the storm," he said.With the storm leaving, some areas will have lingering snow and freeze over, so it will be hard to travel, Javaheri said. Temperatures in the southeast and Appalachians will be 5-10 degrees below average on Monday and Tuesday mornings, he said.

One weather-related death was reported in North Carolina as a result of the snowstorm.Police in Matthews, about 12 miles south of Charlotte, said a tree fell on a vehicle causing it to drive through the front lawn of a church until it hit the front of the building. The driver died and the passenger was taken to a hospital with minor injuries, police said.The state had 500 vehicle accidents in an 11-hour period, North Carolina Gov. Roy Cooper said. One tractor-trailer ran off the road and into a river. "We've seen too many collisions," Cooper said. "From Charlotte across central North Carolina, the biggest concern now is ice making roads even more dangerous."In Durham County, residents typically get about 6 inches of snow over an entire year. But on Sunday morning, they woke up to see 6 inches of snow on the ground. "The roads in Durham are treacherous and not safe for driving," the Durham County Sheriff's Office tweeted. 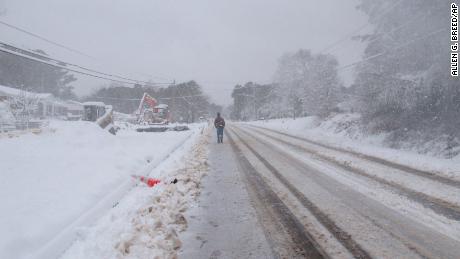 The Durham Sheriff's Office also tweeted Sunday that drivers should be prepared for the unpredictable. "Another example of the unpredictable happening while driving in #winterweather. A chunk of ice fell from an overpass and cracked a deputy's windshield. Thankfully he was ok. If you can't stay home, stay alert. #ncwx #DurhamWeather," the tweet read. Even before the storm hit, Cooper declared a statewide emergency. Grocery store shelves were cleared of bread, milk and other staples.Cooper asked residents to check on vulnerable loved ones and the elderly, if possible. He said 11 emergency shelters have opened across the state.North Carolina Highway Patrol said anyone who must drive should leave twice as much following space as normal behind the next car, in case that vehicle loses control.

A winter storm warning is in effect for most of Virginia until to 2 p.m. Monday, said CNN meteorologist Gene Norman. Virginia's western and central areas were also hit with snow. The city of Richmond and surrounding areas received about 9 inches of snow, according to the National Weather Service in Wakefield, Virginia. Areas south of Richmond got 6 to 8 inches of snow, Norman said. 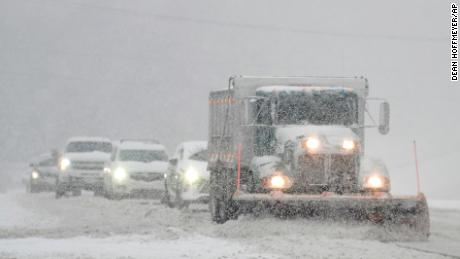 Like its neighboring states to the south, Virginia also saw power outages for thousands, and dozens of vehicle crashes. As of Sunday, there were more than 15,000 customers without power in the western part of the state, according to Appalachian Power. In the Richmond area, Dominion Energy said there were more than 13,000 without power. Virginia State Police reported nearly 60 crashes in Virginia because of the snow, with most crashes in the agency's Richmond division. "The majority of the crashes involve only damage to vehicles. No traffic fatalities have been reported at this time," Virginia State Police spokesperson Corinne Geller told CNN affiliate WTVR. Virginia Department of Transportation officials told WTVR Sunday that road crews were working 12-hour shifts until all roads were passable. Richmond International Airport reported Sunday that nearly 100 flights had been canceled, WTVR reported. One of those flights, a United Airlines flight to Denver, had passengers on the runway for hours. WTVR reported that the flight was supposed to leave at 8 a.m. Sunday, but passengers were stuck on the runway until 11 a.m. after officials said the weather worsened. After deboarding and reboarding the plane, passengers sat on the runway again for four more hours until they returned to the gate at 5 p.m. when the flight was officially canceled, WTVR reports. United officials apologized for the inconvenience.

'Ice is becoming a big problem' in South Carolina

In South Carolina, a state known for palmettos rather than freezing rain, ice-covered roads were making driving conditions perilous. The large Greenville-Spartanburg area received between 2 inches and more than a foot of snow, NWS reported Sunday."Ice is becoming a big problem. Please stay off the roads," Greenville County Emergency Management pleaded. The local National Weather Service office had to adjust its forecast map Sunday after it became clear more ice was expected near Interstate 85. "We have increased our ice (accumulation) forecast quite a bit along the I-85 corridor," the NWS Greenville-Spartanburg office said.

CNN's Artemis Moshtaghian and Ralph Ellis contributed to this report.

MoonArk will be a philosophical mini-museum, left on the moon for future explorers to discover

Cushty! Only Fools And Horses heads for West End

More than 760 reported measles cases in US

admin - May 11, 2018
0
A Republican senator is calling on the Turkish government to follow the lead of North Koreas regime ..