Sable: Shedworks Passion-driven indie adventure game has something to offer for everyone

Sable – At a glance

Sable is a coming-of-age tale of discovery through exploration across a strikingly rendered open world desert.

Go on a deeply personal journey across an alien planet as the young Sable, exploring ancient monuments, ruined architecture, and ships fallen from the cosmos, all while learning the history of its inhabitants and discovering her place in the world.

A vast, intrepid desert. A lone hoverbike and a masked girl dashing across the horizon. This is Sable, the indie game developed by Shedworks and shown at E3 that set the internet ablaze with its unique, charming art style and enigmatic premise.

I sat down for a half-hour behind-closed-doors presentation of Sable at Gamescom with developer duo Daniel and Gregorios, who (as the name suggests) work out of a shed in North London, working passionately to realize their particular and awe-inspiring vision.

The gameplay I witnessed was led by Greg and saw Sable (the protagonist) adventuring through the desert and exploring an underground ruin. The trailers give it away somewhat but seeing this world in motion is a sight to behold.

With a wide range of inspirations from Moebius to Studio Ghibli, the line art style that results is a gorgeous achievement, especially for a team of this size. Shedworks are deliberately using imperfection to shape the look of the game and be true to the animated styles they draw energy from.

It results in an idiosyncratic world that is bursting with detail. I didnt really know where to center my eyes as Sable dashed across the desert, encountering rock formations, ruins and fauna. 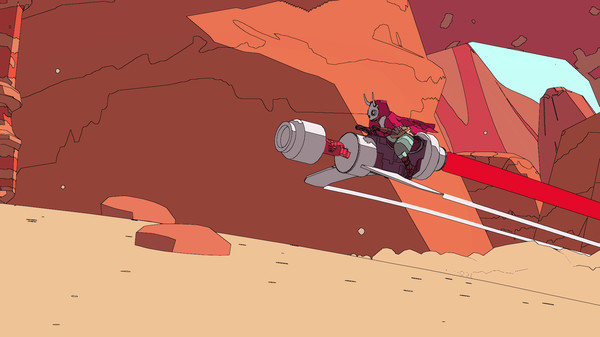 The developers told us about how the game just doesnt look right at 60 FPS, and when you compare it to the typical 12 FPS of anime you can see that with the visual style theyre aiming for, this isnt a game that is about running at the best frame rate. Its about a vision, born out of influence and iterated on to provide a fascinating new experience for gamers.

Sable is here to open minds and evoke emotions rather than play to the natural conventions of video games.

Greg made a point that you could just walk away from a puzzle if you cant figure it out and there is still going to be a game for you to finish.

Whilst they couldnt go into specifics, this was an exciting proclamation about defying the normal structure found in games. Sables developers are in a unique position here, and theyre channelling their passion into making something truly special.

One crucial thing I took from the presentation was that the developers heartfully own their vision for the game as something that everyone can take something from.

Whether youve never picked up a video game before or youre a controller veteran, Sable is an interactive, emotional adventure that will let you find something of worth within its wild and wonderful world.

The story you write is yours alone, and you may experience the whole game differently to your neighbour depending on your choices.

There are a couple of things you can make unique to your character, like masks and each part of your hoverbike, including the trail, one of the highlights of the visual aesthetic. The trail was described as Greg as something that “you could eat”, and truly, it fits the bill.

The customization is there so you can express yourself within the experience.

It was made known that there are certain set elements in the world but you can make it your own in varied and interesting ways, the details of which were yet to understand, but I think thats kind of the point.

The developers treasure the idea of keeping things secret and making the experience unique for every patron. Perhaps theres a puzzle that nobody solves or a ruin that is never found. Such is the beauty of Sable.

One of the few gameplay elements I noticed was a stamina meter when climbing similar to Shadow Of The Colossus and Breath of The Wild, one of the only features in the intentionally sparse UI.

The environment changed often with a range of interesting architecture, sometimes covered in flora and always full of beauty.

I could have honestly sat there and watched Sable explore the world all day, so when my thirty minutes came to a close, I was sad to leave but filled with hope.

Sable, much like other inexplicably interesting games like Control and Death Stranding, is a unique title that is sure to delight those interested in artistic games that are lead by an enthralling vision.

Watch out for it as it approaches release next year.

BTS on making music, watching Netflix and working out during quarantine

Report: Aaron Carter Wants To Open Up About Personal Experience With Michael Jackson

7 hacks to max your miles

Leaving a child behind is the only way they see to...

Cat’s out of the bag: Zoe Kravitz to play Catwoman in...