After their rendezvous on Tuesday in Milan, the staunchly anti-migrant Orban described Salvini as his hero for refusing to allow rescued asylum-seekers, stuck on a boat, to set foot on Italian soil unless the European Union settled them elsewhere.Salvini said he hoped Tuesday was just the first of many more encounters with Orban to change Europe's destiny.The burgeoning relationship between the two far-right figures may look like just another political bromance, but it could turn out to be a Trojan horse for EU leaders, once worried that Brexit would tear their post-war union apart.Hardline Brexit supporters in the UK accuse EU leaders of trying to ensure Britain's withdrawal from the union is a failure so that other member states don't follow the country out the door, a charge that EU leaders vehemently deny. In the meantime, far-right factions across the EU are eying big wins in the European Parliament elections next May, an opportunity that comes only once in five years and promises huge regional influence over policies, most crucially on migration.As talks of a French "Frexit" or a "Nexit" in the Netherlands and other nations fade from public discourse, the EU is more likely at threat from those who want to bend the bloc from within.Jerome Rivière from France's far-right National Rally, formerly known as National Front, was optimistic the election results would favor euroskeptic parties."I believe that for the first time we might be in a position to have a new majority in the next European election," he said."If we do not have a majority, I believe we will have a minority strong enough to prevent them from what they are doing right now."

What these parties have lacked for so long has been unity to coordinate action in the European Parliament. The Orban-Salvini relationship shows that an appetite for such unity is growing. In the past, anti-establishment populist parties that have had beef with the EU have also been at loggerheads with each other.Hungary and Italy, for example, clashed over migrant policy several times in 2016. Italy, a frontline nation for asylum-seekers, has long pressed Hungary to take in a share of refugees to lessen its burden. But Hungary has advocated a hardline zero-immigration policy since the mass movement of asylum seekers into Europe in 2015, at the height of the Syrian war. Most other EU nations have accepted asylum-seekers under the union's relocation program, but Hungary has refused to, along with several other eastern European states. 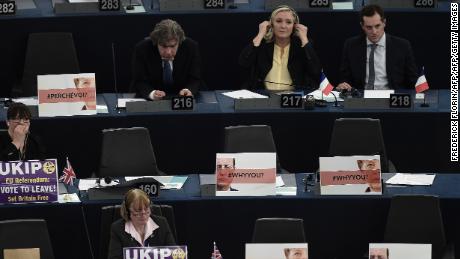 Bilateral cooperation between like-minded parties, voter apathy and the European Parliament's electoral system could be the perfect storm that hands Europe's levers over to populists.Members of the European Parliament (MEPs) are directly elected by EU citizens, but turnout at each vote has fallen consistently over the years — just over 42% of registered voters cast a ballot in the last election in 2014, according to the Public Opinion Monitoring Unit. 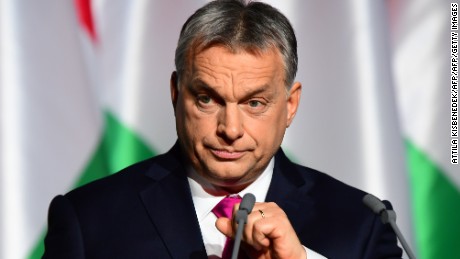 "The euroskeptic parties do better in European elections than they usually do in national elections, that's because the voters on the one hand believe that the European elections are somewhat less important than the national elections," Doru Frantescu, an EU affairs expert, told CNN. Euroskeptic parties also tend to take European elections more seriously for the obvious reason that one of their main objectives is to challenge the EU.The European Parliament's system also benefits fringe parties. Instead of winning seats on a first-past-the-post basis, candidates need simply to pass a low threshold of the popular vote. This has meant that parties like France's National Rally have a far greater presence in the European Parliament than they do in their own national assemblies.This representation in the European Parliament is already in play.MEP John Stuart Agnew from the far-right UKIP party in Britain argued in a European Parliament opinion report that human-induced climate change was "negligible" and pointed to cosmic ray fluctuations, the sun, oceans and water vapor as "factors that really do change our climate." This kind of denial of climate change science was unheard of in the European Parliament just a few years ago. Frantescu said it's unlikely skeptical far-right parties can gain control of parliament, but that doesn't mean their influence won't grow. With the European Parliament already fractured, even a small increase in seats could make a significant difference."You don't need to gain a majority in the European Parliament to exert influence on the EU policies and the (European) Commission, you just need to have a somewhat solid minority," Frantescu said. A strong minority could be effective in blocking policy, he said, and a small boost in influence in parliament could be the start of greater change in the longer-term. "The European elections are not the end of the movie, or the end of the world, rather it's the beginning," he said. "The question is will they be able to coordinate afterwards. Will they be able to get maybe good results in the national elections in the member states? … Will they get their hands on other national governments so that they can exert pressure in the council of the EU, which is the other key legislative body of the European Union?"

Some of the parties looking to shake things up in Brussels are counting on Steve Bannon, US President Donald Trump's former chief strategist, to help buoy their electoral results.Bannon has been on several European tours to galvanize like-minded political outfits and even helped launch The Movement, a "supergroup" uniting populists to challenge the European establishment."Everybody agrees that next May is hugely important, that this is the real first continent-wide face-off between populism and the party of Davos," Bannon said in an interview with the Daily Beast in July, referring to Davos, Switzerland, as symbol of the world's liberal elite. "This will be an enormously important moment for Europe." 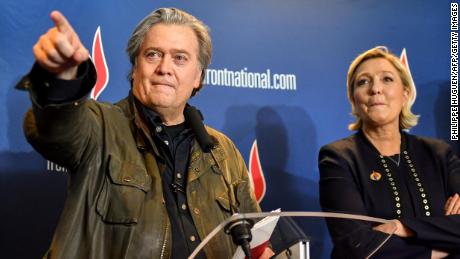 Movement founder Mischaël Modrikamen, leader of the Belgian People's Party, said Bannon was offering resources to help the new alliance at the elections. "He will bring tools that were in use in the States. They won the election against all odds. He will bring tools of course. Europeans are already using them," he told CNN, adding that big data was one area European parties could benefit from. "We are in a big fight for the soul of what I believe should be Western civilization." 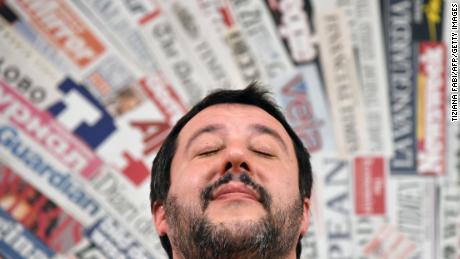 Salvini has floated a similar idea to Bannon's supergroup, calling for a European "League of Leagues" to unite populists. Salvini's spokesman told CNN that the minister had met with Bannon to exchange ideas, at Bannon's request. But pro-EU MEPs say they are not threatened by Bannon. Elmar Brok, a German MEP, said he was confident pro-EU members would prevail in the elections and that Bannon's efforts to intervene in European affairs would likely backfire.He accused Bannon of using Europe's far-right figures to destroy Europe and pivot power to other nations. "In this sense, Mr. Bannon is very helpful to us because we can easily explain to our people that the purpose of all that is to weaken European nations in such a way that they do not have to play any role in this world, and that this becomes a world of Washington, Beijing and Moscow," he said. Analysts also question how influential Bannon can be. The unity he and Modrikamen are seeking will not be easily achieved."A profound problem is that this is the fragmented European landscape. Many of these right-wing parties, or right-wing populist parties, they may all have problems with the EU, but many of them have problems with each other," said Alexander Clarkson, a European and international studies lecturer at King's College London."So for Bannon to come in and try to create unity out of all these very powerful, very well-financed movements that don't necessarily like each other, I think that says more about an American, not just Bannon, but an American media's version of European politics and Bannon's vision of European politics."

Europe swelters under a heatwave complicated by Covid-19 restrictions

Guardians Of The Galaxy 3 ‘on hold’ after director sacking