To baffle players further, the last time the Cube moved it left a purple rune on the ground.

It is believed, due to leaked datamined files, this will happen six more times before the Cube activates.

According to the Fortnite Battle Royale Leaks Twitter account: “The Cube left a rune burned into the ground as it moved!

“According to this picture itll move 6 more times and leave 6 more runes burned in the ground before reaching a lake and then activating.”

Fortnite Cube: Where is the Cube? When will it move? Where is it going? What does it do?

What is the Cube?

The Fortnite Cube has been baffling Battle Royale players since it appeared on August 24 due to a lightening storm.

The giant purple cube is one of the biggest mysteries of the game recently.

What baffles players even more is that it is not static – it uses the power of the Hop Rocks to move around the map and even glows when players go near it.

After moving for a while, it stops and extrudes a low gravity zone for a while, before continuing on its path.

The strange Cube even makes strange noises, and kills those who get in its way.

Bizarrely, it also grants shields to people that stay within a safe distance.

Now people want to know where it is heading. 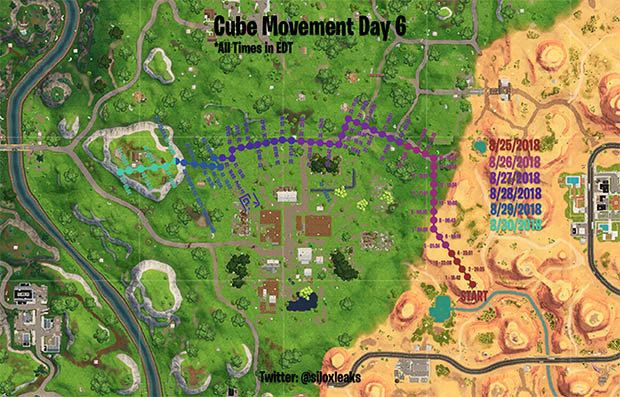 FORTNITE MAP: The last location of the Cube

When will it next move?

A Cube countdown clock has been created by Twitter users @siloxleaks and @sud4nym.

This shows exactly when the Fortnite Cube will next be on the move.

It seemed like the Cube was moving every 1 hour and 43 minutes – however, the cheeky Cube has been known to be unpredictable.

Twitter user @Silox said: “So, the Cube has started to move 2 times as fast, the countdown will be updated super soon!”

The cube left a rune burned into the ground as it moved! According to this picture it'll move 6 more times and leave 6 more runes burned in the ground before reaching a lake and then activating pic.twitter.com/YuboXcZauN

Where is the Cube moving?

The Cube has been moving across the map over the last few days after it suddenly appeared.

It is likely the Cube will continue moving for a while, perhaps until the end of season 5.

Some players have predicted it will eventually end up in one of the lakes – possibly Loot Lake.

One Reddit thread even suggests the Cube will make its own lake after going through datamined game files.

The files shows the Cube will “MoveToLake” and then “TurnOn”.

What does the Cube do?

It is not yet known what the purpose of the Cube is.

However, it is known that players can shoot the Cube to deal damage to nearby players.

Meanwhile, should a player touch it or hit it with a package they are propelled away.

Standing near the Cube seems to be beneficial, as it can regenerate your shield.

Players can also jump on the Purple Cube to get extra height.

It is thought the outcome of the Cube will not be revealed until the end of season 5.

There is likely something interesting in the middle of the Cube, which will be revealed when it reaches its destination.

Antique Dealer Almost Dies When Appraising His Old Throw Blanket, Guess Its Worth

17 lockdown films to be streamed on Netflix

Monster Boy And The Cursed Kingdom Review – Thy Kingdom Come

Monster Boy And The Cursed Kingdom Review – Fit For A...

admin - December 18, 2018
0
It's difficult to talk about Monster Boy and the Cursed Kingdom without discussing Wonder Boy I..