Other events planned to mark the tragedy include a 24-hour vigil, a memorial church service and the unveiling of an Islamic-style mosaic made by the Al-Manaar/MCHC local Muslim community center that will be laid at the bottom of the charred remains of the apartment block. Grenfell Tower has been wrapped in white and will be illuminated in green for the 24 hours of the anniversary — a color chosen by the surviving residents of the block. Schoolchildren across Britain are being encouraged to wear green on Friday as a mark of respect to those who died. Seventy-two people were killed, many of them children, in the blaze that tore up the 24-story residential tower block. That figure includes Logan Gomes, who was later stillborn after his mother was stricken by the fumes she inhaled as she fled.The fire exposed acute divisions in British society, as well as dangerous weaknesses in social housing, urban planning, fire regulations and disaster management.Retired Court of Appeal judge Sir Martin Moore-Bick is heading a public inquiry into why the disaster happened.Last month, a series of commemorative hearings were held in which relatives and survivors paid tribute to those who had lost their lives.Many of the victims died after they were told by fire services to stay put inside their homes. Flames raced up the cladding that had been installed around the block of mainly social housing to improve its appearance. 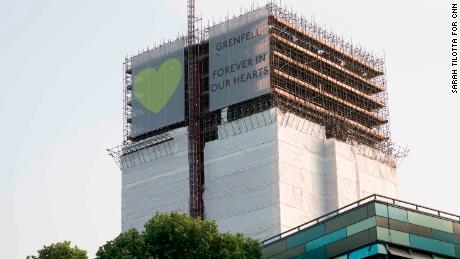 Last month, the government of Theresa May finally yielded to local authorities' demands to fund the replacement of combustible cladding, similar to that used on Grenfell Tower, in more than 300 buildings to the tune of £400 million ($535 million). Police are also investigating the London Fire Brigade's now controversial "stay put" policy for people trapped in fires in high-rise buildings.According to Metropolitan Police Commissioner Cressida Dick, about 200 detectives are working on the police investigation into the fire.So far there have been no prosecutions of officials of the Conservative-led Kensington and Chelsea Council who chose the cladding panels over more expensive fireproof alternatives. A year after the disaster, 69 households, including families with children, are still in emergency accommodation while only 82 of the 203 new permanent homes pinpointed by the Council for the Grenfell families have been occupied, according to the Council-run Grenfell Support group.Noha Maher, brother of victim Hesham Rahman, tweeted on June 4 what many of the survivors are feeling. "Can't imagine what my brother and his neighbours went through that night," he wrote. "They were murdered, that's what we been saying from day 1. Those responsible need to go to prison. No justice, No peace."It is unlikely the survivors of the flames that fateful night will ever fully recover.The National Health Service estimates the cost of mental-health services alone for the survivors will hit £10 million by this time next year.

Russia eases lockdown despite recording more than 9,000 new Covid-19 cases in a day

Hope and help for the arts

Creative arts ‘should be compulsory at GCSE’

13 year old Fortnite streamer breaks a milestone as the first female and deaf...

Study shows that married people are more satisfied with life than...

admin - December 25, 2017
0
Look at these two happily being happy that they’re happy, probably on a #DateNight (Picture: Ella By..

Rihanna is centre of attention at Fenty party as she shows...

Anthem should learn from Diablo 3 – or risk being another...

Save the Children promises review after claims against former CEO