Her hands are in the air, hovering in front of her bright red lips, as if holding a deliciously messy corn envelope. She tilts her head sideways and pretends to bite. "You don't bring the taco to you, you meet it," she says, repeating the motion a few times for good measure. "And you turn to it."In the script for the first episode of her upcoming Starz drama "Vida," the first-time showrunner made sure to make note of the maneuver in a scene when one character, back in town to bury her mother, makes a therapeutic visit to her favorite local taqueria. A line in the script reads: "She eats a taco the right way." Not everyone will notice the detail, Saracho says, "but you'll notice." But Saracho was not making an assumption because my last name ends in a "z." She knows I know the right way to eat a taco because we both grew up in a place where taquerias are only outnumbered by people named Juan. Saracho and her family moved to the Rio Grande Valley from Mexico when she was about to start middle school. If the entire southern border of the state was the shape your foot makes when its in a high heeled shoe, the Valley, as it's called in short, would be the ball of the foot. When Saracho was coming of age in the border region, it was different than it is now. Much more "porous," she says. These days, the relationship between the countries whose cultures meet in the perpetually warm slither of Texas where we once called home is complicated to say the least. But what remains true about the region, Saracho says, is that it breeds a certain confidence of culture — something that served her then and certainly serves her now. When the area you grow up in is predominantly Hispanic — more than 85 percent, according to Census data — there is an absence of the "otherism" that can prove so toxic to a young person, says Saracho."It prepared me in so many ways for this hybridity, but I didn't know it was preparing me," she says.That's not to say her transition to an American school was always easy. There were fashion missteps ("I was dressing like a weird immigrant…a lot of blue jean.") and language learning curves that would make reading aloud in class an lesson in the cruel quirks of the English language (why is Plymouth not pronounced ply-mouTH?). The accent that left her embarrassed and headed home in tears some days, however, also led her to compete in speech and debate in school, paving the way for a segue into high school drama. The speech and debate part of the equation had actually been an accident. She signed up thinking she'd be receiving speech therapy — to help her shed her accent — but proved to excel because she had a natural talent for voices and natural inclination for animated delivery. (Years later, she'd pay the bills while rising the ranks as a Chicago playwright by becoming the Spanish-speaking voice of Special K cereal for ten years.) It wasn't until fate and some stubborn determination landed her in at Boston University and later Chicago, where she'd establish a theater company, that she realized the rest of the country doesn't quite operate like the Valley. One story stands out in particular.The night she moved into her Roscoe Village two-flat in Chicago, two white, female neighbors gave Saracho and her roommate some lemonade and launched into an explanation about the neighborhood while sitting on the stoop of their new building. Watch out for the "sketchy areas," they said. "'Over there you have some…" Saracho lowers her voice to a whisper recalling their tone. True to her speech competition roots, she tells all her stories like she's acting out a play and doing every part."…black people.'" They did it again when saying the word "Mexicans." She'd never heard anyone do that before — say "Mexican" and "black" like they were bad words. She kindly informed them that she, in fact, was Mexican. The girl felt the need to clarify and said she was talking about "the other kind of Mexican." "And so I think I spent the rest of my time in Chicago, those 15 years, unpacking what she meant," Saracho says.

Not throwing away her shot

"Vida," which premieres Sunday, centers on two sisters (Melissa Barrera and Mishel Prada) who upon returning home to the east Los Angeles neighborhood where they grew up after the death of their mother discover they have quite a bit of unpacking to do themselves — as daughters who discover their dead mom was secretly married to a woman and as people who have a complicated relationship with their culture and neighborhood. It's not an autobiographical show, but Saracho and her all-Latinx (a gender-neutral term for people of Latin descent) writers infused it with terminology, images, and themes rarely seen on TV. One term was the word pocha, a derogatory made-up word that in essence refers to a person trapped between Mexican and American cultures, as if to say you can't do either right. Saracho says it is being reclaimed by a new generation as a positive. There is no "right" way to be anything. "[The main characters] are not the children of immigrants," she said. "They're the grandchildren of immigrants, and that's important too, because that's American. That's being American." At Starz, Saracho, who's worked on shows like "How to Get Away with Murder" and "Devious Maids," recently inked a three year overall deal, which means she'll develop new projects for the network. Or, as Saracho explains it to her mother, a loving and faith-driven woman who has never been Los Angeles and doesn't quite understand what her daughter does for a living: "They gave me a job for three more years." With "Vida," her first show for Starz, she became the first Latina showrunner in the premium cable space, according to the network's senior vice president of original programming, Martha Fernandez.When the network put out a call for work from and meetings with Latinx creatives in Hollywood in late 2015, Saracho's play, "Mala Hierba," caught the network's attention. By early 2016, Saracho was in Fernandez's office, going into detail about how her love for the network's show "Outlander" sent her to Scotland and, by chance, into the path of a handsome Scot she sees whenever one of them can make the long journey. ("I was supposed to stay two weeks and I stayed six.") True story."Even the way she was telling me the story was incredible — all the little flourishes, all the funny moments, all the suspense she put in there," Fernandez remembers. "I was like, 'Alright, I have to work with this lady.'"It helped, too, later on, that Saracho delivered a knock-out pitch for a show the network had been looking for someone to develop — a Latino-centric story about gentrification and gender identity, with a L.A. backdrop. That pitch became "Vida." "It was real; it was authentic. You can tell this wasn't somebody on the outside looking in and making assumptions about what it means to be Latina, what it means to be queer, what it means to be the other," Fernandez said. "This is somebody who with a lot of heart and humor really had an insider's perspective." 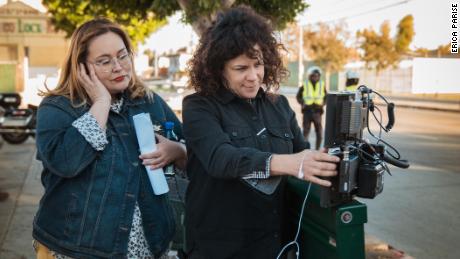 That's not exactly how the people of Boyle Heights felt about Saracho when "Vida" was announced. To them, she was no different than the the gentrifying villain her show features — a vendida (sell-out), a gente-fier, a "white-tina". (Saracho had never heard the term before, but after having it yelled at her while filming, she worked it into the script.) This didn't sit well with Saracho. So, she listened. After getting a six-episode order from Starz based on their pilot presentation — the 15 minute teaser for Starz executives used to lobby for a greenlight — she vowed to disrupt the Boyle Heights ecosystem as little as possible. They found other parts of East L.A. to stand in for corners they'd be shooting in often. On the rare day they had to film in Boyle Heights, they made sure their big trucks and base camp were out of the way, often at a large cemetery or field house that was not in use. "I was listening to them, to respect and to be there the least amount that we could," she says. "Because they're right. When you go…you kind of gentrify the neighborhood a little bit. And if you're in production three months, you're a gentrifying force. I get it." She admits, "I don't know if a non-Mexican show runner would have thought about that necessarily." This is a case, I say, for the argument that networks should be hiring people of color to tell their own stories. She nods. "Because then you're careful with the community whose story you are telling." 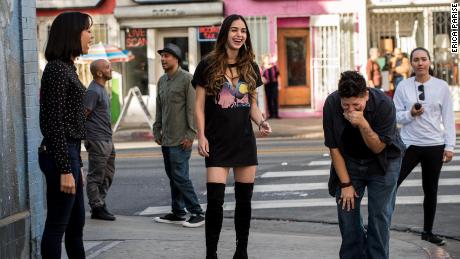 "Vida" is ripe with communities that TV has historically forgotten, particularly the queer Latinx population. If "Transparent" and "Orange is the New Black" marked important moments for visibility, "Vida" is the next chapter of that progress. "It's like pick-up basketball but it's art and it's feminist art and it's female gaze-creating," "Transparent" creator Jill Soloway, a friend of Saracho's who worked with her on HBO's "Looking," tells me later. "So when I watch 'Vida,' it's like, this is a conversation between all of us." She adds: "I feel like we're all creating this legacy together."

'…eventually they will hear you'

It's the night of the "Vida" premiere in downtown Los Angeles when I see Saracho next. She's thrilled because she told Starz they should have a pink carpet instead of a red carpet at their premiere, and they delivered. She knows it's a small detail, but it's huge, she says, because it proves she has a voice in this craziness. If only the people at the status symbol hotel on a hill who wouldn't park her Ford Focus years ago could see her now. Maybe she'd even be seated without being harassed first.She's trying to take it all in, because she knows there are so many people like her who deserve to have a moment like this, but don't and won't. "My hope is [this] says we're ready for these sorts of stories and these sorts of narratives," she says. "I hope it's not just a trend." She hopes to see "the Dominican 'Vida'" one day or "the Puerto Rican 'Vida.'" She hopes "Vida" makes room for more complicated narratives about what it means to be American. She hopes Hollywood takes chances on Latinx showrunners that don't have a lot of experience ("because until you get the shot, you don't know if you can do it"). She hopes more of the voiceless get heard. "To that little kid who was 13 and trying to figure out her accent, I'd [say], 'Keep speaking out because eventually they will hear you.'" And that fight to be heard is just part of vida.

Where is Xur Today? Destiny 2 Xur Location, What Exotics is Xur selling Today,...

Snoop Dogg thanks himself as he gets Hollywood star

Angelina Jolie and Brad Pitt to go head to head in...

Ariana Grande is not planning on dating anyone for the rest...