But someone had to be at the front of the line. And in the end, they picked her.Gabriela Hernandez, a 27-year-old, pregnant mother of two whose journey CNN has followed for weeks, was among eight people chosen Monday by her fellow migrants to begin the process of seeking asylum in the United States. Hernandez had fled a threat of violence in Honduras with her sons, ages 6 and 2. But after a month on the road — just as they reached the port of entry at San Ysidro — officials there said they'd reached capacity and were "temporarily unable to bring additional persons traveling without appropriate entry documentation into the port of entry for processing." Dozens of migrants vowed to camp outside the center, just a stone's hurl from San Diego, until "every last one is admitted into the United States," an organizer said. When customs officials on Monday again began processing the cases of people they termed "undocumented arrivals," the migrants looked among themselves for who should step to the fore.

Hernandez had come 3,000 miles to get to this place, two small boys in tow as a third child, in just its second trimester, grew in her belly. They'd gotten so close, and yet, were still far from a celebration. 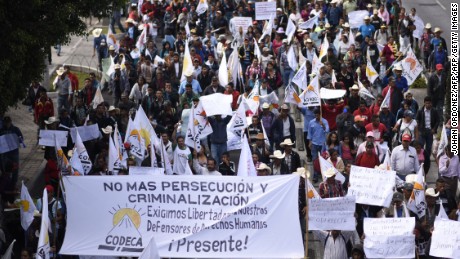 On the last Sunday of April, Hernandez was standing in a windy walkway outside the US border crossing facility, when a passerby recognized her from CNN and gave her a bill that she tucked away in her pocket. After he left, she unraveled the note and was shocked that it was $50. "Pizza!" yelled her older son, Omar.Hernandez, a fellow mother from the caravan, Tesla Rich, and Omar hailed a cab to a Domino's franchise on Avenida Revolución. They ordered two large pepperonis — $5 each — plus a ham and cheese pizza — a favorite of her other son, Jonathan — and some fries and wings.Rich had left her 9-month-old daughter Valentina with someone at the crossing. "Do you think she's OK?" she asked Hernandez. "I've never left her with a stranger like this before." Rich, 19, soon would find baby Valentina just fine. What she couldn't know — at least not at this moment — was the fate of another daughter back in Honduras, where violence recently had claimed Rich's uncle and sister, and where finding work amounted to only a dream. Taken together, the elements of that nightmare had spurred her trip north — and her wait, right now, for pizza. Back in the taxi, they folded open the boxes."My love, eat this carefully," Hernandez told Omar, who still burned his tongue.

'I just can't with you right now'

Hours later, back in line, they'd moved into a sloping, spiral walkway, past huge California and US flags. The air had grown colder. Hernandez had her boys pile on every stitch of clothing they had. She and Rich begged each volunteer who went by for more blankets. A legal volunteer gave Omar and Jonathan his phone to watch Spanish-language cartoons. They stopped their sibling squabbles until the phone died. Then, Omar wailed. They'd been in "the pen" for eight hours. Hernandez made coffee, which little Jonathan loves. Omar squirreled away the sugar and Splenda. Then, a coffee cup tipped, soaking the blankets."I just can't with you right now," Hernandez said in an echo of any mother, anywhere. She used her last baby wipes — the ones she'd been hoarding — to sop up the mess. Jonathan played with a straw. Then, rain began to fall. The women hauled the blankets, the backpacks, the extra pairs of shoes, the children up under a bridge walkway lit by bright floodlights. As Rich nursed Valentina, people crossing into the United States eyed them all. Hernandez's eyes drooped. She'd lost patience for her active boys. She'd begun to lose faith. "I'm still hopeful, but I'm getting worried," she said. "I'm not going anywhere."

'I cannot go back to my country'

That evening, a border protection officer walked up to the migrants. Eight people could come forward to be processed, he said. Would the officer choose, asked Laura Gault, an attorney with Human Rights First. No, he said, it was up to the migrants. 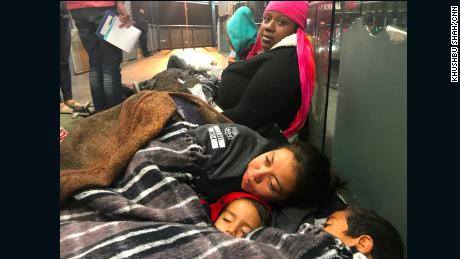 Women and children should go first, someone said. Soon, the group agreed: Hernandez and Rich, with their children, plus another mother and child, and a teenager traveling alone would go, Gault said. And with that, Hernandez and her boys disappeared into the processing center, perhaps for hours or days or weeks. A step closer, perhaps, to the United States.Hernandez's plan always had been to claim asylum, given the danger to her life and her children in Honduras. Still, she knew it held no guarantees. "I don't know what I'm going to do," she'd said earlier. "I cannot go back to my country."

What’s behind the Justin Timberlake backlash?

Mahershala Ali to star in ‘Blade’ for Marvel

admin - December 12, 2019
0
The short commentaries are being scrapped, and investigative reports are being prioritized, the comp..