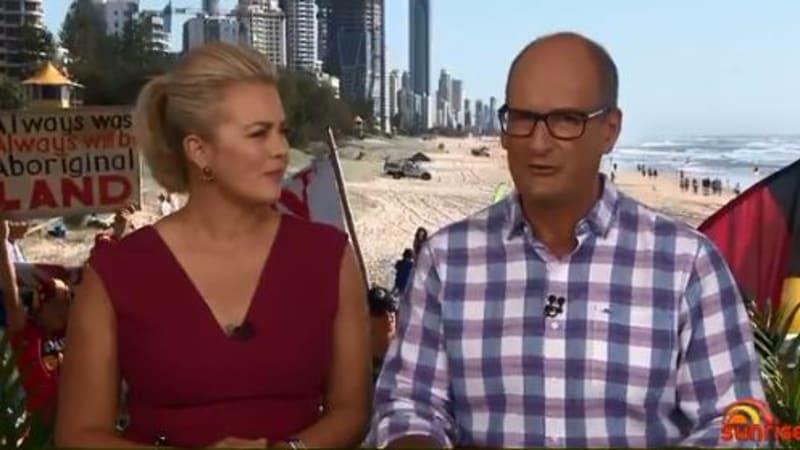 Armytage, meanwhile, pointed out the protesters were preventing others from taking part in the background. Sunrise had planned to stage a dress-up competition to find which child best represented team Australia.

"A lot of families here [with] kids dressed up who wanted to win their $250," Armytage said. "I do want to point out the original segment that sparked this was about children at risk, not about land rights. So… just keep that in mind."

After cutting back to the beachfront for the second time, the demonstrators started to disperse and were replaced by young children dressed in yellow and gold and waving Australian flags.

Sunrise was swamped by Aboriginal protesters last month outside its Martin Place studios in Sydney. However, producers lowered the blinds and projected old footage of Sydney's CBD to avoid any offensive language on placards going to air.

The demonstration was sparked by a controversial segment about Aboriginal adoption hosted by Armytage. The TV host claimed Aboriginal and Torres Strait Islander children at risk of rape, assault and neglect can "only be placed with relatives or other Indigenous families".

But of the four Aboriginal and Torres Strait Islander children adopted between 2016 and 2017, three went to non-Indigenous families, according to the government's own figures.

Protesters were also furious after panel member Prue MacSween suggested there should be another stolen generation.

admin - May 10, 2018
0
Neil deGrasse Tyson criticized the “Chappquiddick” movie on Thursday by knocking the producers for m..

Algorithms should have made courts more fair. What went wrong?

Mike Rowe Breaks Down The Real Tragedy With The Death Of...