In a speech laden with tough rhetoric for his critics and immigration advocates, Sessions decried officials who support so-called sanctuary city policies as "extremists" promoting "open borders.""Stop treating immigration agents differently from everybody else for the purpose of eviscerating border and immigration laws and advancing an open borders philosophy shared by only a few, the most radical extremists," Sessions said.Sessions had harsh words in particular for Oakland Mayor Libby Schaaf, who recently announced publicly that federal authorities would be conducting immigration crackdowns in her area. That move has been heavily criticized by immigration officials, who allege she's responsible for hundreds of criminals avoiding capture. "Her actions support those who flout our laws and boldly validates illegality," Sessions said. "There's no other way to interpret those remarks.""So here's my message to Mayor Schaaf: How dare you?" Sessions continued. "How dare you needlessly endanger the lives of law enforcement to promote an open borders agenda."Schaaf fired back in a statement, saying she was confident her state would prevail in the lawsuit."How dare you distract the American people from a failed immigration system that tears apart decent families and forces the workers that our economy depends on to harvest our crops, deliver our services, and build our cities to live in fear and work under oppressed conditions," Schaaf said. "How dare you distort the reality about declining violent crime rates in a diverse, sanctuary city like Oakland to advance a racist agenda?"The attorney general's speech in Sacramento at a state law enforcement gathering came on the heels of a move by the Justice Department late Tuesday to sue California over its so-called "sanctuary" policies that prohibit some cooperation with federal immigration enforcement. 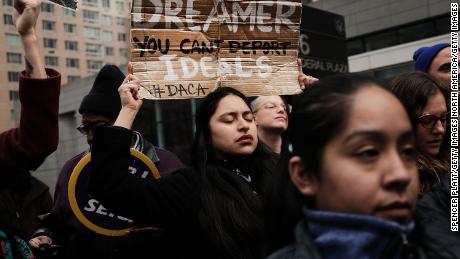 The move is an aggressive escalation of a battle the administration has been waging since President Donald Trump's inauguration to pressure local jurisdictions to help the feds catch undocumented immigrants. Sessions defended the lawsuit, saying it was about preventing "nullification" of federal laws, which he compared to the secessionist movement during the Civil War. "Contrary to what you might hear from the lawless open-borders radicals, we are not asking California, Oakland or anyone else to actually effectively enforce immigration laws," Sessions said. "I can't sit by idly while the lawful authorities of federal officers are being blocked by a legislative action of politicians," he added.States and cities say their policies are protecting the best interest of their residents and that they should not have to spend their limited resources on a federal responsibility.California Gov. Jerry Brown and state Attorney General Xavier Becerra strongly pushed back on Sessions in a news conference shortly after his event Wednesday, saying repeatedly that his accusations and characterizations of the state's sanctuary policy are "untrue." Brown called the law a "carefully balanced measure" that had been endorsed by law enforcement."This is really unprecedented, for the chief law enforcement officer of the United States to come out to California and act more like Fox News than a law enforcement officer," Brown said. "This is a political stunt."Becerra said California is confident its laws are constitutional and will stand the challenge from the Justice Department."I look forward to making these arguments in court, and we will continue to stand up for our police and our sheriffs," Becerra said.Brown even invoked the special counsel investigation into Russian election meddling in what he said were multiple "lies" from Sessions. "Open border, lie one. Protect criminals, lie two. California wants to secede, lie three. Not true," Brown said. "We know the Trump administration is full of liars. They've pled guilty already to the special counsel. … I call upon (Sessions) to apologize to the people of California for bringing the mendacity of Washington to California."Sessions defended the Trump administration's push on undocumented immigrants, stressing that it wants to focus on legal immigrants. The US welcomes over 1 million immigrants a year legally by giving them green cards, more than any other nation, he said. "And let no one contend that we reject immigration and want to 'wall off America' from all immigrants," Sessions said. "Indeed, at this unprecedented rate, we will soon have the largest percentage of non-native born in our nation's history, and the percentage is continuing to rise every year thereafter."The lawsuit is the latest broadside from the Trump administration against so-called "sanctuary cities" — a broad term referring to localities that abide by some measure of non-cooperation with federal law enforcement — though previous courts have blocked many of the administration's efforts to pressure sanctuary jurisdictions, with federal judges siding with those cities and states in litigation. Sessions said Wednesday he expects to prevail in this case. "California, (it) absolutely appears to me, is using every power it has — powers it doesn't have — to frustrate federal law enforcement. So you can be sure I'm going to use every power I have to stop them," Sessions said. "We are going to fight these irrational, unfair, unconstitutional policies that have been imposed on you and your officers or our federal officers. … And we intend to win this fight."

Check Out This Pennsylvania Band Of Wounded Vets Called The Resilient

‘Draw’ with a needle

admin - June 18, 2020
0
The "Parks and Recreation" star has been in Hollywood for so long that he has multiple friend groups..

Planting tiny spy chips in hardware can cost as little as...