Overwatch Brigitte Hero REVEALED: Now live on PTR but patch notes for Hero 27 not live yet

Overwatch new hero has been revealed and as expected it's Brigitte, daughter of Torbjorn.

Overwatch desciption of the character reads: "Meet the engineer turned valiant squire who fights on the front line to protect her allies"

First and foremost the Brigitte is a support character, but Jeff Kaplan also teased that she also has quite a few tank attributes.

Here's a bit more from Blizzard describing how the character handles in game:

"Brigitte specializes in armor. She can throw Repair Packs to heal teammates, or automatically heal nearby allies when she damages foes with her Flail. Her Flail is capable of a wide swing to strike multiple targets, or a Whip Shot that stuns an enemy at range. When entering the fray, Barrier Shield provides personal defense while she attacks enemies with Shield Bash. Brigitte’s ultimate ability, Rally, gives her a substantial short-term boost of speed and provides long-lasting armor to all her nearby allies."

Keep reading and you can check out her abilities and learn more about her backstory.

Brigitte is currently available for testing on the PTR but patch notes for the character are not yet available. 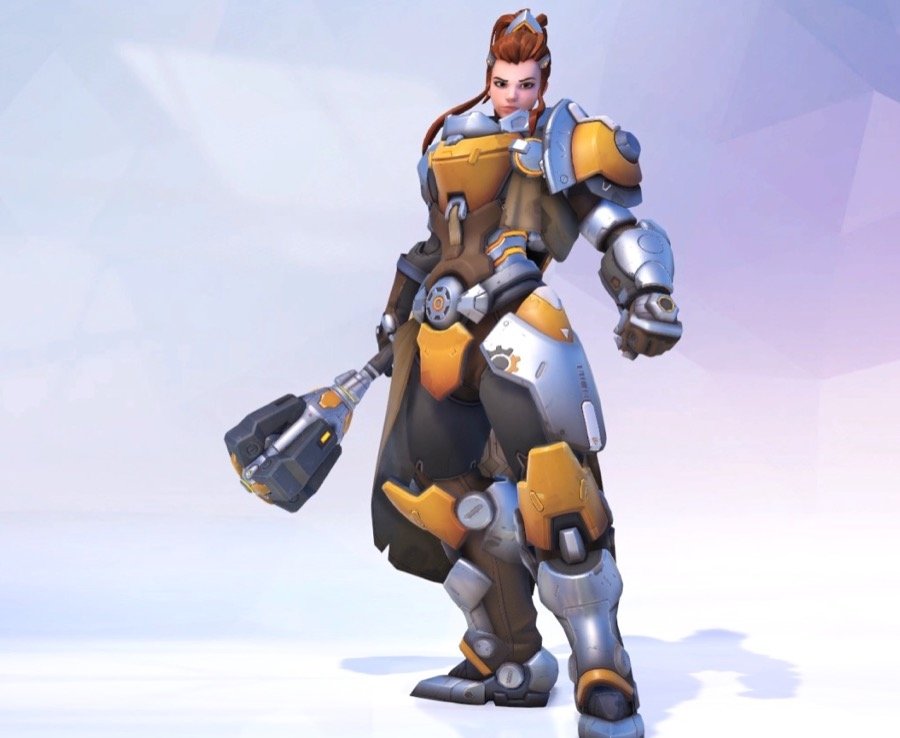 ROCKET FLAIL
Brigitte's melee weapon has an extended range, enabling her to strike multiple enemies with a single swing.

REPAIR PACK
Brigitte throws a Repair Pack that can heal an ally. Any healing over that ally’s maximum health provides them with armor instead.

WHIP SHOT
Brigitte throws her flail a long distance, dealing damage and knocking an enemy away from her.

SHIELD BASH
Once her Barrier Shield is deployed, Brigitte can dash forward to stun an enemy.

RALLY
Brigitte moves faster and provides all nearby allies with armor that lasts until it’s removed by damage.

No longer sitting on the sidelines, Brigitte Lindholm has taken up arms to defend those in need of protection.

The youngest daughter of weapons designer, Torbjörn Lindholm, Brigitte was the first of his children to show an interest in mechanical engineering. Brigitte spent much of her spare time in her father's workshop, learning the trade and honing her skills. Her aptitude for engineering mirrored that of her father's, but Brigitte's primary interest was in armor fabrication and defensive systems, unlike Torbjörn, who was world renowned (and perhaps infamous) for the weapons he created.

Everyone expected that Brigitte would continue her apprenticeship and follow in her father's footsteps. But her plans changed due to influence of another prominent figure in her life, her father's close friend and fellow Overwatch agent, Reinhardt Wilhelm. A close friend of the family and Brigitte's godfather, Reinhardt told Brigitte tales of heroes and chivalry as she grew up. After his retirement and Overwatch's fall, Reinhardt declared that he would become a knight-errant on a quest to bring justice. Before he left on his adventures, Brigitte surprised him by asking to join him as his squire. Reinhardt accepted.

As a squire, Brigitte had many responsibilities, the most important of which was the upkeep of Reinhardt's Crusader armor (a design she was familiar with as the current version was designed by her father). But more and more, she found her main job was taking care of Reinhardt himself, trying to protect him from his overenthusiasm even as his body was breaking down from years of combat.

Eventually, she realized that serving only as a mechanic wasn't enough, and that the best way she could aid Reinhardt was to become a warrior in her own right. While Reinhardt trained her in combat, Brigitte began to build her own suit of armor in secret.

Now Brigitte fights at Reinhardt's side to protect him, and any others in need as knight and squire journey to make the world a better place, one battle at a time.

The Atlantic Hired A Conservative — Liberals Are Losing Their Minds [VIDEO]

Rare £48,000 Pokémon Trading Card gets lost in the post

The Case Against Adnan Syed: ‘There has to be another trial’

A Nintendo Direct might be coming this week and it could...

admin - April 8, 2019
0
A Nintendo Direct might be coming this week and it could reveal some huge Switch news (Pic: Nintendo..

Hearthstone Rise of Shadows release time and what to expect